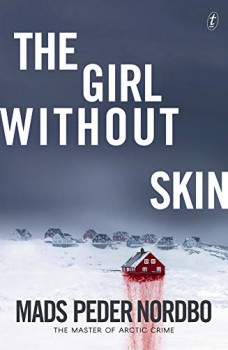 The Girl Without Skin

The discovery of a mummified body on the edge of an ice sheet in Greenland leads to the re-opening of an unsolved case from the 1970s. Danish journalist Matthew Cave and a young woman released from prison after serving a sentence for killing her family delve into the shocking and brutal past.

Danish journalist Matthew Cave is working in Greenland's capital Nuuk, struggling to recover emotionally and physically from a car accident which had claimed the lives of his wife and unborn daughter. He goes through the motions of adapting to new Arctic life. One day he thinks he has stumbled across an ancient Norseman when a mummified corpse is discovered on the edge of an ice sheet.

But his hopes of world-wide fame that would follow the publishing of his article, together with unique photos by the local photographer Malik, are dashed the next day. The mummy has disappeared, and the body of the policeman Aqqalu, who was keeping watch, is found naked and flayed. Police realise that the mummy is connected to a series of unsolved horrific murders from the 1970s.

To help with the disappointment of finding, and then losing a body that certainly was not an old Viking, Matthew is given the task of researching documents relating to the baffling cold case. Four men were killed in the same brutal way as the most recent victim, skinned and gutted like seals with a sharp Greenlandic skinning knife, an ulu. At the same time four young girls went missing but that seemed to be less important. Neither the girls nor the killer have been found. Matthew also receives a diary by another Dane, policeman Jakob Pedersen, who at the time had tried to follow up suspicions of serious child abuse in the town.

As Matthew delves more into the past, he becomes both fascinated and terrified by Tupaarnaq, a young woman in her late 20s, recently released from prison after serving a 12-year sentence for killing her immediate family, except her younger brother, who hadn't been at home that afternoon. She refused to speak during the trial as her guilt seemed obvious, and since then Tupaarnaq has never trusted anyone. She's tattooed and armed for hunting and becomes the suspect straight away. Soon, though, she and the lonely journalist form an unlikely alliance.

Matthew's private investigation is interspersed with Jakob's account from 40 years earlier which gives many clues as to what might have really happened, and why there is such a strong opposition to solving the case. Not everything is as it seems as Jakob had focused mostly on attempting to help an abused girl, and his reasoning often strays. Nevertheless, his memories paint a sad picture of Innuit people who had no chance of being understood by those coming from different countries.

Mads Peder Nordbo doesn't shy from detailing killings, scattering gruesome descriptions of mutilated bodies throughout his novel. However, I feel that this method emphasises the author's and his main Danish characters' shock at the cruelty of some people who had been shaped by social injustice. Add a very harsh physical environment and lack of understanding from authorities and it's no wonder that Greenlanders take justice into their own hands.

I wouldn't condone their actions but as the story develops and more horrific secrets come to light, the motives become believable. Vivid images of all types of snow, ice and otherworldly beautiful landscapes give an authentic feel to this tense thriller, translated from Danish by Charlotte Barslund.