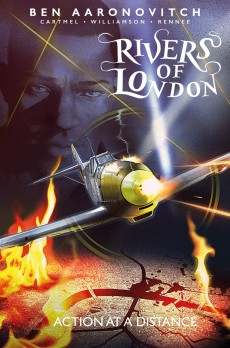 The death of an old friend takes both DCI Thomas Nightingale and Peter Grant on a trip down memory lane.

This is one of those books – or in this case, graphic novels – that I pounced on with glee as soon as it hit my doormat (and thanks to the vagaries of the Christmas post, its arrival was delayed for a seemingly interminable time). Each of the graphic novels fits into a defined point in time in Ben Aaronovitch’s sublime Rivers of London series, and a helpful diagram based on a map of the Thames pinpoints each one in the canon of the main series.

The graphic novels complement and extend the book universe and if you think anything with pictures equals a children’s comic then think again. By dipping your toes in these waters you’ll quickly find yourself immersed in a world where other people – writer Andrew Cartmel, artist Brian Williamson and colourist Stephani Renne – have done your work for you and brought the adventures of London copper Peter Grant and his enigmatic and urbane boss, DCI Thomas Nightingale vividly to life on the page without you needing to supply your own mental pictures to fit the words on the page.

Action at a Distance starts with Nightingale – the last officially registered wizard in England – getting ready to attend the funeral of his old friend Angus Strallen. As he leaves, Nightingale suggests that Peter might find it interesting to take a trip into the archives of the Folly, the most unusual police station in Britain. There’s something in his boss’s voice that makes Peter think time in the archives would be time well spent …

In October 1957, a serial killer preying on women in Cumbria had come south to continue his activities on the streets of London. Hot on his heels was policeman Angus Strallen who is determined to get his man, and in pursuit of the killer, Strallen turned to an old friend, a man he last saw in war torn Europe.

Action at a Distance is told in a series of flashbacks, combining Nightingale’s memories with Peter’s trip into the Folly’s archives. The snippets of Nightingale’s war service are likely to prove of huge interest to fans of the series and for me, this was a delight from start to finish, intertwining three different plot threads with style and ease. Nightingale – a man who is aging in reverse – is perfectly captured in the artwork in the different time periods. The differences are subtle, but they’re there if you look for them, as I did, and no doubt many others will do the same.

There’s always been a touch of ruthlessness showing under Nightingale’s immaculate exterior, and that’s in evidence here, which brings a pleasant chill to both his wartime exploits – after all, this is the man who stopped a Tiger tank with magic in the Battle of Ettersberg – and to his post-war investigations in company with Strallen. Nightingale’s wartime experiences are being steadily drip-fed into the series, with fans like me pinning our hopes on eventually getting to see the gory details of Operation Spatchcock in which three out of five British military wizards died.

In the now usual bonus features after the main story, there’s a lovely piece of fan-service paid in a short piece showing vampiric housekeeper Molly happily writing slash fiction featuring Nightingale and Peter on Peter’s laptop. Other features include one on Jasper Maskelyne, billed as the magician who foiled Hitler’s army, and another on Bloodhounds, in homage to Hesperus, Nightingale’s dog who played a part in bringing the villain to justice. If you relate to fictional animals the way I do, all I can say is don’t worry …

This long-awaited graphic novel doesn’t disappoint on any level.