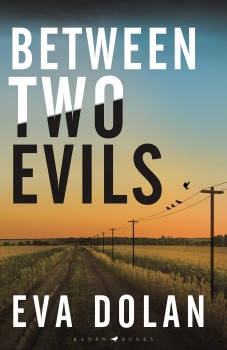 When a doctor at an women’s detention centre is murdered, there are no immediate suspects but plenty of people who seem to be putting roadblocks in the way of the latest investigation for Peterborough cops DI Zigic and DS Ferreira.

After a short hiatus for a standalone crime thriller, Eva Dolan brings DI Dushan Zigic and DS Mel Ferreira back into action, this time investigating the murder of a doctor who worked at a female detention centre where women are held while their right to remain in the UK is investigated.

Two years ago, Dr Josh Ainsworth had acted as a whistle-blower in a scandal that had engulfed the Long Fleet detention centre, where several members of staff had lost their jobs amidst accusations of systematic abuse of the women detainees. Two years is a long time for someone to have borne a grudge over a job loss, but that’s not something that Zigic and Ferreira can afford to ignore. Their enquiries are hindered by Securitect, the private contractor who run the centre and whose director is clearly only affording them the bare minimum of cooperation.

At the same time, the pair have to contend with the release of serial rapist Lee Walton due to an irregularity at the lab that had run forensic tests in the case that had seen him sent down for life. Walton isn’t showing any signs of wanting to keep his head down and instead he gets straight in Ferreira’s face, wanting to find his girlfriend and child, convinced that Ferreira knows where she’s gone.

Ferreira’s boyfriend, DCI Billy Adams is determined to deal with the threat to her by putting Walton away, even though he’s been ordered by his old friend and mentor DCS Riggott to stay well away from Walton, but Billy Adams isn’t a man who’s known for playing by the rules – and neither is Riggott, something that is likely to come back to haunt them all.

It didn’t take long for me to get hooked on Zigic and Ferreira, even though I only came into the series at the time their old unit, the Peterborough Hate Crimes Unit, was being wound up. The pair are still reeling from that decision and are feeling somewhat adrift back in mainstream policing, but it doesn’t take them long to get stuck into their latest case. Zigic isn’t sure what he thinks about his partner’s relationship with her boss. He’s also under pressure at home to agree to send his kids to an expensive private school paid for by his wife’s parents. Anna is unhappy about the prospect of her children suffering from bullying in the state sector, but Zigic doesn’t want to be railroaded into a decision.

The two strands to the story are equally complex and equally compelling, with a sharp edge of danger to each. The investigation into the doctor’s death is particularly multi-layered with perceptions shifting at times with bewildering speed, so it’s hard to know where the blame really lies.

Both main protagonists are likeable, and their creator does them both the considerable courtesy of not hitting them hard with the clueless stick for the sake of the plot. Their actions remain in character throughout, which makes a pleasant change in crime fiction where characters are all too often bent to fit the constraints of the story. I was also drawn – as usual – to the bad boy vibe that DCI Adams gives off, and he also stays well in character, even when his actions have the potential to end in a major train wreck for his career – and Zigic’s.

If you don’t already know the characters, don’t let that put you off. Between Two Evils works as well as a standalone as it does as part of a series. This is quality crime fiction that will always jump to the top of a tottering to-be-read pile.