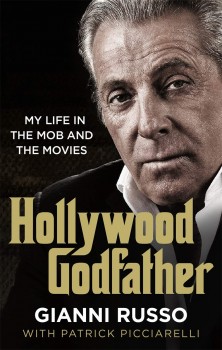 The autobiography of Gianni Russo, who lived as a gangster both in real life and in the movies, and also rubbed shoulders with the cream of Hollywood.

A grammatically mangled dedication does not bode well for the book that follows, and I suspect Gianni Russo’s co-writer has earned his bread putting the author’s sentiments into comprehensible English. That this should be necessary is explained by Russo’s limited schooling, significantly disrupted by five years in hospital from the age of seven after an attack of polio.

Russo was born in the New York district known as ‘Little Italy’ in the mid-1940s, and with mafia connections through his Sicilian grandfather was recruited in his early teens. Russo says he was not a tough guy, and although he says plenty about his mob contemporaries, what we hear about his personal crimes is largely limited to the conveyance of cash or messages between the big players.

The only exception is two murders he admits to: the stabbing of a predatory paedophile while still a child in hospital, and the shooting of a guest at his Las Vegas club who had jabbed a woman in the face with a broken bottle and was threatening Russo with the same. He might not have been tough, but this is clearly a guy who knows how to take care of himself.

He describes how he blagged a major role in The Godfather (Carlo Rizzi, who sets Sonny up for his murder) by claiming a wholly spurious role as negotiator between the studio and the mob. That he was able to carry off the role without acting experience he attributes to coaching from Brando. His later singing career is likewise facilitated by coaching from a master – in this case Sinatra.

His mob and Hollywood connections brought him into contact with an impressive catalogue of A-listers, and he drops names thick and fast. He also makes some impressive claims: to have bedded Marilyn Monroe as a young man, to have seen Lee Harvey Oswald in company with a mob boss immediately prior to the assassination of JFK, and to have been involved with the transmission of mob cash for laundering at the Vatican.

His assertions about these and other matters will be of interest to conspiracy theorists, the liaison between Joe Kennedy and the mob, for example, and the outcome when JFK reneged on ‘understandings’, and Bobby K’s involvement with the death of Monroe.

Much of what is said or hinted at here echoes claims by others, and I have no reason to challenge the truth of it, but much comes across as perhaps economical with the truth. At one point he ‘falls in love’ with a woman, Jessica, telling her is a Jewish doctor, and is devastated when having discovered the truth she wants nothing more to do with him. You can’t help feeling that Russo has edited reality to fit his view of himself – perhaps this is the reason the whole seems so unconvincing.