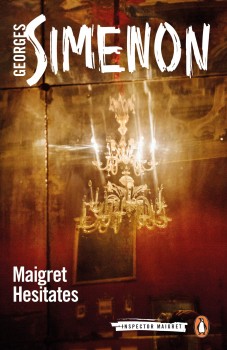 Chief Inspector Maigret receives a series of anonymous letters threatening murder in the household of an eminent lawyer.

What can any reviewer possibly say that’s new about the incomparable Belgian Georges Simenon, regarded by many as the father of contemporary European detective fiction?
The prolific Simenon who died in Lausanne in 1989, produced about 400 novels and short stories. He is best known as the creator of the fictional detective inspector, later Commissaire, Maigret of the police judiciaire de la préfecture de Paris, a series of 75 books which were translated into more than 50 languages and sold in more than 50 countries. Maigret sparked scores of films and TV series in 35 countries – more than 40 films in France alone – as widely spread as Japan and Russia. British TV viewers, whatever their age, will remember the great Rupert Davies, Michael Gambon, Rowan Atkinson and even Richard Harris in the title role.

Now Penguin, in a bid to introduce an author and a character who became a household name in continental Europe to another generation, are close to the end of their reissue of the whole series in new translations. This is number 67 of Simenon’s relentless output – and in my opinion, is probably the best.

In what is another brilliantly crafted study of human motivation, more a ‘why’ than a ‘whodunit’, Simenon reveals more about Maigret’s own character, through exposing so much humanity in the criminal it is hard not to understand, even sympathise, as he seems to, with the reasons for the crime and even express a feeling of forgiveness.

A series of anonymous letters threatening murder lead the detective and his faithful team into the wealthy household of an eminent lawyer as a curious game of cat and mouse within Parisian high society is played out. Maigret hopes his involvement may prevent the threatened crime, but after spending two days with the family, their employees and servant, he is convinced that that the group contains the letter writer, the murderer and the potential victim.

As the story develops within the claustrophobic quarters of an ill-mixed and dysfunctional family, this back-to-front case offers Maigret no sense of achievement, merely a troubled mood and a deep foreboding. He is faced with a series of dilemmas: whether the whole thing is a hoax, if the murderer wants to be stopped, and whether he or she can be identified before something drastic happens.

This offers a totally different emphasis to the usual simple murder story and makes Maigret – and therefore his reader – think and act in less formulaic ways.

Simenon was unequalled at making us look inside both his characters and ourselves, though he masked this ability by his brilliance at drawing us obsessively into his stories. He is always able to bring the feel of a place or event to the reader’s mind. You can imagine what it feels like to be in his office, walking down the street, at the scene of a murder, Without too much overt violence, cruelty or bad language, he manages to convey an understanding of the less attractive aspects of human nature and how and why an individual can be moved to murder.

Yet it is offset by the richness of everyday life – items such as the weather and how this affects the people, the actions they take, what they wear. Maigret never fails to express a proper Frenchman’s love of fine food – in his case usually simple dishes from sea or field, accompanied by a good wine – but never allows this to interfere with his ability to do the job.

His pipe and the need to ground himself in domesticity through time spent with his wife all add subtle layers which build a sense of life and originality and keep the stories fresh and entertaining. These variations on a theme, which many other authors have subsequently copied or tried to develop, make Maigret and his author one of the most successful partnerships of all time.