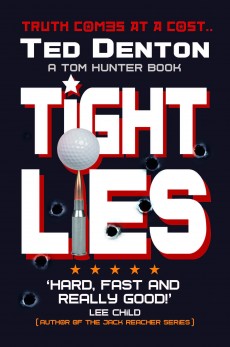 Daniel Ratchet, a rookie golf agent, discovers that the Russian gas company sponsoring the tournament and fixing results is also on the verge of tying up a mega deal with the British government. Lone wolf ex-SAS man Tom Hunter must save him.

Ted Denton’s debut novel is a Jack Reacher-style action thriller set in the privileged world of professional sports agents against a backdrop of political double-dealing, corporate corruption and brutal violence.

Young northerner Daniel Ratchet arrives in Spain to start his dream job as a golf agent on the European Tour, but soon uncovers that the tournament sponsors as well as the caddies are involved in match fixing, fraud and corruption.

In London, the same company – a Russian mafia front ­– is working on a huge gas deal with the British government. Veteran civil servant Derek Hemmings is set to rubber-stamp the deal but suspects corruption at the highest levels.

A race against time follows – both to rescue Daniel and for Hemmings in Whitehall to prove the deal is corrupt. With the stakes high, the body count mounts.

If you like violent thrillers, then Tom Hunter, Denton’s unlikeable ex-SAS protagonist, follows the well-trodden shoot first, ask questions later, path of the all-action hero. If he differs from others of his genre, it is that he is unapologetic for being who he is and his self-motivation at times is quite interesting. His backstory serves to show where he has come from and how he has evolved as a man capable of living and acting the way he does.

The author turned down a bursary to train as an army officer. If he’d accepted, he might have made Hunter’s backstory more realistic. This foul-mouthed, misogynistic loner – a near-pathological killer – would never have survived in the regiment. In a specialist small unit operation where teamwork, keeping a cool head and planning count for as much as aggression and mental, as well as physical, fitness, his bull-in-a-china shop methods and total lack of strategy would see him RTUd – returned to unit – in short order.

I’m unsure any regiment would welcome him back and certain no respectable firm specialising in hostage recovery would want to take a chance on him! He’s good in a close-quarter fight and offers some interesting insights into this type of combat, stressing how the average Saturday night punch-up artist falls into lazy and predictable patterns, but that’s about all he has to offer.

Which is all a real pity, because the rest of the book is clever and believable as it tells a story of political corruption, the infiltration of organised crime into the highest levels of government and a good old-fashioned tale, featuring a good old-fashioned civil servant in the form of Hemmings, who is prepared to risk his career – and even his life – for those good old-fashioned virtues of loyalty and decency.

Of the rest of the characters, would-be agent Daniel is rather bland, although he does find courage under intense pressure, and the Russian mafiosi are exactly what you would expect from them.

This is a potentially very good book, wrecked by too little background research into the protagonist and too much Rambo-style violence and gore. But if you like this kind of thing and are not too critical, you might enjoy it.