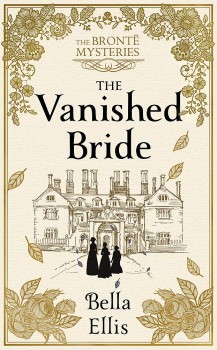 When the three Brontë sisters hear that a young women has gone missing from her home leaving no clue but a pool of blood, they decide to investigate.

Since a visit at the age of ten to the former home of the Brontë sisters in Haworth, Yorkshire, author Rowan Coleman has apparently been obsessed with the lives, literature and legacy of this remarkable trio.

Even the pen name she has chosen for what promises to be a fascinating new series is a tribute. Bella Ellis is a play on the names they used for the 1846 issue of their poems under the male pseudonyms of Currer (Charlotte), Ellis (Emily) and Acton (Anne) Bell.

Much of the background to this compelling, clever and hugely imaginative story is based on reality. For their investigation into the disappearance of a young woman missing from her home leaving no clue but a pool of blood they pose as investigators for the fictitious firm of Bell Brothers.

Presenting historical personages as amateur detectives is always a course fraught with pitfalls. But Coleman succeeds magnificently. This near-Gothic tale is elegant, witty, charming, intriguing, atmospheric and compulsively readable from start to finish, and not only pays homage to the spirit of their rich literary output but is also a period-perfect historical mystery.

The investigation, complex, even dangerous, into the sisters’ prime suspect, the more than half-mad new husband of the missing woman – who bears a close resemblance to Arthur Huntingdon, the lecherous, violent and alcoholic husband in Anne’s The Tenant of Wildfell Hall – is almost secondary to the relationships and characters of the sisters.

The interplay between these contrasting characters is the glue that binds this story together. Their complete unity in adversity and their worry for brother Branwell – their childhood leader and possibly the most talented of them all as he destroys himself with drink and laudanum – is beautifully portrayed.

Coleman has taken on a lot with this breath-taking concept – setting up our most beloved literary heroines as investigators, while at the same time forcing us to think about the constraints of women – but has succeeded quite spectacularly.