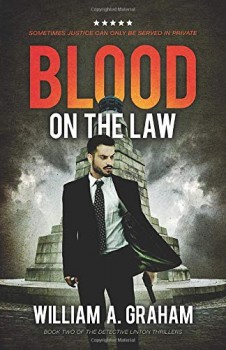 Blood on the Law

by William A. Graham

PI Allan Linton is hired by his former wife, a top lawyer, to help prove the innocence of his boyhood friend – now the city’s major drugs dealer – found with £2 million worth of cocaine in his car.

In my years as a crime reporter I met a fair few private investigators – but never one who had solved a series of murders which baffled police, brought down a major criminal ring, or saved the country from agents of a sinister foreign power!

The genre is now totally OTT with its unbelievable superhero detectives bearing little resemblance to real lives largely spent in tracing missing persons, trailing unfaithful spouses and occasional outings into accident investigation or industrial espionage. This is why William Graham, a relatively new voice in Scottish crime fiction, and his almost horribly ordinary protagonist Allan Linton offer both a compelling and interesting comparison to the run of the PI mill.

Born and raised in Dundee, Graham worked for more than 30 years for the giant publishing house DC Thomson. An avid reader of American crime novels, the work of the great Mickey Spillane, originally also a comic-book writer, inspired him to create a less brash – and very Scottish – good guy hero of his own.

Allan Linton, principal of Linton & Associates, Inquiry Agents, is no Mike Hammer. There’s no Colt in a shoulder harness. He is pretty much averse to violence unless absolutely forced to defend himself. He prefers to use intelligence, his contacts on both sides of the law built up as a crime reporter, occasional threats and subterfuge – and now and again a downright lie!
When violence is required, it is left in the more than capable hands of his only ‘associate’, the laconic, cynical, former soldier, Niddrie, whose skills in unarmed combat and weaponry were never gained as the Pay Corps clerk he claims to have been.

A man who has seen and done too much, Niddrie operates strictly to army logic and training and is an ideal counterbalance to Linton’s more laidback personality, largely at ease with himself and others. Flashbacks develop the relationship between characters and provide emotional ties, in Linton’s case, his failed marriage, his precocious teenage daughter, a love of 1960s music inherited from his father and an unaccountable liking for what many Scots regard as ‘healthy eating’!

When Linton’s childhood friend, now Dundee’s drugs overlord, is arrested with £2 million pounds worth of cocaine hidden in his car, he engages the city’s top criminal lawyer to represent him. She hires her former husband, Linton, in an attempt to prove evidence of his innocence – at least on this charge.
A good, strong plot, some unexpected twists and plenty of humour, particularly Linton’s relationship with the constantly surprising Niddrie, will keep your attention. Even the secondary plot involving a distraction burglary at the home of an elderly war hero, is plausible and nicely paced.

Characterisation is strong and complex – although it is quite difficult to imagine a vastly successful drug dealer with a conscience – and believable characters, drama, action and the strong vein of humour make this a worthy, if rather less bloody, addition to the Spillane heritage.