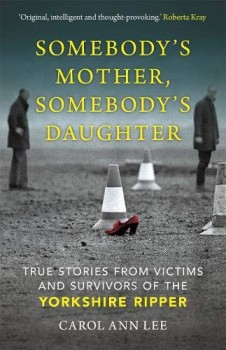 True stories about the victims and survivors of the Yorkshire Ripper.

Although it is over 40 years since Peter Sutcliffe killed for the first time that we know of, his name and tabloid title, the Yorkshire Ripper, still circulate up and down Britain. As is almost exclusively the case, this is another killer who commands far more attention than his victims.
His story, while sadly far from unique, stands out. The women he maimed and killed are or were far too ordinary for an audience hungry for salacious detail. In the dark ages of the 1970s and 1980s, the press and police far too often conveniently stereotyped Sutcliffe’s victims as lowlifes – perhaps because of their own shortcomings in a farcical investigation.
So this is a book that needed writing. A book that should have reminded us that victims are not statistics.
Unfortunately, it doesn’t. Although well-intentioned, it does not bring those women to life. They are more one-dimensional than poorly portrayed fictitious characters, because each chapter is little more than a vaguely chronological list of events and facts, with the author’s voice muscling in at every opportunity, reminding us what scum men are.
As we enter the 20s, and I don’t mean the 1920s, the author should not feel the need to gloss over the marginalised lives of sex workers as if she is embarrassed. Often, women (and men) are driven through desperation and other reasons to sell their bodies. Sometimes it is even a lifestyle choice. Let us not pretend the oldest industry doesn’t exist. Let’s not pretend it doesn’t have a role in today’s society or that of the last century. Let’s not imagine those who work in the sex industry are lesser people than you or me. Sex-work is part of some of these victims’ stories. In that case, make it so.
Sadly, the more books I read where the author claims to be focussing on the victims, the more I realise that is rarely the case. This book is yet another that puts as much emphasis on the last moments of the victims’ lives as it does the decades preceding that point. In other words, the majority of this unbalanced book is chapter and verse gore.
The writing is mediocre. It reads like half-edited notes, weighed down with tell. And ironically, the little content that does breathe oxygen into the book is from unedited writing/introspection of some of the victims.
That the book contains photos of the women Sutcliffe devastated speaks volumes. Quality fiction does not need the addition of photos of the protagonist or antagonist. Neither should factual books. They certainly do not need a photo of the tools the predator used to mutilate and kill his victims. I have no desire to see a black and white photo of a hammer, screwdriver, chisel and knife. It does not enhance the women’s stories. It leads the reader to reflect, once again, on the perpetrator and his crimes, not his victim’s lives.
Yes, this book takes its reader on a journey, but it is a chronological journey that does little more than list all the Yorkshire Ripper’s known victims. I am certain Google does that too.