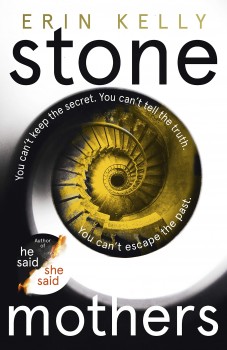 Marianne’s husband has bought a convenient pied-à-terre. But it’s the key to a dark past that should have remained buried.

Marianne can barely hide her fear. Sam, her husband, has bought a flat in a converted mental hospital on the outskirts of the Suffolk town where she grew up, so she can be close to her sick mother. It may be a beautiful apartment, but it is in a building dripping with Marianne’s dark secrets. Secrets so bleak, they caused Marianne to flee her hometown and her teenage boyfriend. Two can keep a secret if one of them is dead. But three share Marianne’s secrets, and one is well versed in the art of blackmail.
This story covers three points of view and four eras, moving backwards in time before leaping forward at the end. It is written mainly in the third person past tense.
Like many novels, Stone Mothers starts with a firework-display style first chapter, which soon fizzles into something that resembles a bonfire built with damp logs. Worse, in this story, the implied suspense and fear of the opening paragraphs is as fake as opening with a dream scene. The cheesy hook is a blatant and annoying ploy to rope the reader in to a story that is painfully slow for the first third and has an even slower mid-section that drifts aimlessly.
However, one thing kept me reading: the hints and images of Nazareth, the mental hospital. The author has given the building an oppressive heart, an uneasy soul, a nasty labyrinthine mind and a horrifying past, which is historically and factually convincing. Nazareth is possibly the most believable and lively character in the story.
Marianne is supposedly clever and smart. Unfortunately, she comes across as anything but intelligent. Even her age is unconvincing. In her late 40s, she has managed to leave her small town and small-town mentality behind, yet her voice and introspections have not changed from her teenage self. She is naïve and self-dramatising, almost more a romantic era protagonist. She spends her time either self-scolding or worrying about Honor and Jesse in a stagey, histrionic, italic-and-exclamation-mark way that’s juvenile and unrealistic. Her final ‘act’ is not only cheap and tasteless, it also ruins her as a protagonist.
Helen is a far more interesting character, primarily because of what she endures in her youth; tragically common during the era in which she grew up. She dominates the bulk of the second half of the book and her story is fascinating.
Honor’s point of view at the end does nothing for the story. It dilutes through repetition and worse, it does little to vindicate Marianne’s earlier fears.
One other character worth mentioning is Marianne’s mother. Dementia is stealing her from her family. Kelly portrays this touchingly and convincingly.
I enjoyed the juxtaposition of power, class and money versus the anger, shame, guilt and pain of unemployment. However, Marianne’s dirty secret is underwhelming, the suspense is forced, and the finale is anticlimactic with one too many conveniences. Dividing it into four sections creates distance between the narratives and makes it read more like self-contained vignettes.
This book struggles to find itself and never quite reaches its full potential. That’s a shame, because there is a nugget hidden in there of something incredibly touching, and the subject should be unforgettable.