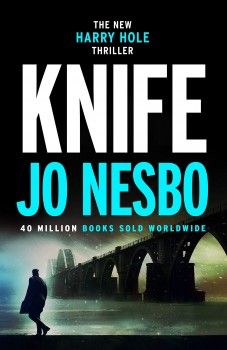 Detective Harry Hole's life is in chaos and when a deranged and vengeful enemy strikes at the very heart of it then Harry must face his darkest hour.

This is the 12th outing for Harry Hole, now operating as a lone wolf having been suspended from his duties with Oslo's Crime Squad Unit – despite being the most successful detective ever. He's also been thrown out by his long-suffering wife Rakel and is back on the booze big time.

The story is set in the familiar territories of police HQ, Rakel's home in the snow-covered hills north of the city, Harry's downtown flat (hardly ever slept in) and his favourite watering holes. It features his (few) old faithful friends from childhood; stepson Oleg; forgiving colleagues and the usual recently released weird homicidal maniac with a personal grudge against our hero. A homicidal maniac who is also a rapist and whose claim to fame is his ability to impregnate his female victims in two and a half minutes flat (he times himself!)

And then, a very brutal murder close to home throws our already off-balance Harry into a seemingly irreversible nosedive where even those nearest to him question his motives.

At times in this long tale, I felt that Harry had exhausted all of his nine lives and that the man and his exploits had perhaps come to the end of the road. But Jo Nesbo introduces new and interesting characters with some mileage in them for future outings. There's Sung-Min Larsen, an ambitious one-time student of Harry's who works for rival law enforcement agency Kripos, and who looks as if he has his eye on Harry's job. And there’s Roar Bohr (great name), sharp-shooting ex-special forces in Afghanistan, with a rifle, post-traumatic stress disorder and a score to settle with the man who raped his little sister.

In the final 100 pages the many disparate threads of this story are so cleverly pulled together that I literally couldn't stop reading. There is a shocking denouement and a thrilling resolution where (nearly) all the loose ends are tied up. And in the final sentence Harry's fate is left hanging in the balance with a clever nod towards Luke Reinhart's classic The Dice Man. So bring on Harry Hole number 13, please …