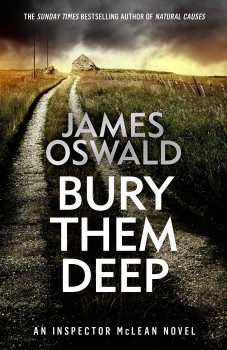 DCI Tony McLean must cope with a missing member of staff, a multi-agency operation with a silly name and bodies galore.

James Oswald’s Detective Chief Inspector Tony McLean is a standout character for me in a genre that sometimes seems awash with maverick cops of all types, loaded down with as much baggage as Heathrow’s Terminal 4. What makes McLean different is that he doesn’t actually need the job. He’s well off, owns a big house and just works because he enjoys it.

The other thing that’s different is that he’s used to dealing with the cases that have an unusual angle concerning things that go bump in the night. There’s no overt use of magic of the type found in Ben Aaronovitch’s hugely entertaining Rivers of London series. The kind of weird shit (to borrow Aaronovitch’s terminology) McLean gets caught up in is more of the deeply creepy kind found in Phil Rickman’s Merrily Watkins series set in the liminal border country of Herefordshire that might, just might, have a rational explanation, but most probably doesn’t. Oswald’s own brand of understated but deeply unsettling supernatural is something that has always appealed to me, and he carries off the difficult trick of ensuring that the police procedural side of the books is never overshadowed by the strangeness lurking in the background.

The latest outing for the Edinburgh-based DCI McLean starts with him somewhat grumpy about the most recent major operation to land on his desk: Operation Caterwaul. McLean prefers to deal with what he sees as more relevant crimes such as the violence, robbery and sex and drugs trafficking that besets his home city rather than get caught up in the far-reaching tentacles of financial crime. He knows that’s important too, it’s just not for him, and the souped-up bureaucracy that comes with a multi-agency operation is definitely not up his usually rat-infested alley, such as the level of vetting required even for admin staff working on the job. And the fact that he has to deal with the Americans is just the icing on the worst cake ever.

Problems start for McLean when one of the admin staff doesn’t turn up for work. Anya Renfrew is normally utterly reliable and equally bland, but naturally she’s harbouring a secret, one that was exposed in the prologue, but that’s something that only the reader knows. It takes McLean and his colleagues a lot longer to cotton on to what’s going on in Anya’s private life.

Oswald has a deft hand when it comes to characterisation, and for me the elderly but indomitable ex-detective chief superintendent Ramsay, languishing bored but frail in an elderly person’s home, carries the honours this time. She’s able to make even the usually unflappable McLean feel like he’s in short trousers when she totters onto a crime scene and makes her presence felt, much to the discomfiture of all concerned. I also very much enjoyed the teenage tearaways, Gav and Bobby, and was rooting for a happy ending for Bobby as soon as I started to see beneath the brash exterior.

For McLean, there’s an uncomfortable blast from the past in the shape of someone he’d believed definitely dead and buried, but maybe not buried deep enough, unlike the other bodies that turn up on a desolate stretch of moorland. The books always have something of special interest running through them and in this case it’s the gruesome folk legend of Sawney Bean, famed for luring travellers to their death and eating them, but it took a while for the connection to become apparent, as the police procedural side of the series is equally unpredictable.

Bury Them Deep is an excellent addition to a series that shows no sign of flagging, even after reaching the not inconsiderable milestone of the tenth book.