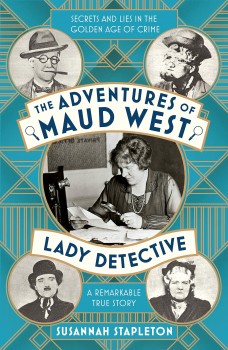 Maud West ran a detective agency for more than 30 years. Her exploits grabbed headlines, but did she tell the truth?

Advertisements described her as London’s ‘Premier Lady Detective’, but did Maud West, who ran her agency for more than 30 years, starting in the early years of the 20th century, ever tell the truth about herself? Her exploits grabbed headlines across the world, but she was forced to hide key aspects of her identity to thrive in a class-obsessed and male-dominated world.

As historical researcher Susannah Stapleton reveals in this fascinating book, Maud was the most unreliable witness to her own life. In the stories she told to what would now be classed as the tabloids, she resembles a character that any author, even in what was the Golden Age of detective fiction would discard as completely unbelievable. But according to West, she sleuthed on behalf of much of ‘society’, often disguised as a man, carried a pistol and had a ‘heavy’ from her staff outside her office door to protect her, if necessary, from crooks she had exposed seeking revenge!

Her adventures led her to travel the world – snooping in Brazilian drug dens as easily as she did in posh English country estates, unmasking blackmailers, exposing adulterers and once retrieving stolen letters by drugging a thief and climbing under a tiger-skin to escape.

What sets West apart from the many fictional private eyes is that she actually existed – or at least some version of her did. Interweaving stories from Maud’s own casebook with social history and extensive original research, Stapleton embarks on a long quest to find who she was and what the reality was of being a female private detective.

A stream of anecdotes features runaway heiresses, dodgy foreigners, stolen necklaces, car chases, forged wills, and climaxes in West being shot at by a gang in the Paris backstreets; shadowing an elegant woman spy around Britain’s principal naval bases; and of course, that trip to a Brazilian drug factory.

No matter how tricky the situation West wold have us believe she was always in control. When an angry blackmailer burst into her office with the cry: ‘I am fortunate in finding you alone Miss West’, she picked her gun from her writing table and coolly replied: ‘Oh, not quite alone.’ At which stage the villain, with the 1920s equivalent of ‘It’s a fair cop’ as most of her targets seem to have done, meekly gave up!

A photograph from the time shows West as a plump-faced, middle-aged woman in a sober yet stylish dress, with a single strand of pearls. Yet, as she liked to make clear to readers of Pearson’s Weekly, the Sunday Dispatch and other ‘pops’, West was far more likely to look like someone else.

Dressing up as an old woman allowed her to pass unnoticed. Disguising herself as a young floozy to entice tipsy young men into giving up secrets was even easier: ‘A pair of heavy earrings make me look frightfully common.’ Passing herself off as a fortune teller in a servants’ hall was simply a matter of ‘a wonderful robe … covered with black cats and moons’ – and waiting for gossipy housemaids to tell all.

Dressing up as a man was a speciality. She was, she liked to boast to the American papers, a mistress, or should it be master, at squeezing into a three-piece suit, sticking on some facial hair and sauntering into such exclusive male venues as gentlemen’s clubs to strike up a conversation with whoever she happened to be stalking.

Yet the photographs accompanying these articles show pantomime prosthetics, so crude it is a wonder West managed to convince anyone she was other than a heavy-set middle-aged woman with a large bust!

In an at times light-hearted, at times annoyed and scathing portrait, Stapleton doesn’t go deeply into the motivations for West’s apparent love of cross-dressing. Adopting her own persona, that of a latter-day Golden Age lady sleuth commissioned to solve a case of mistaken identity, she pauses long enough to accept that West’s practice of passing herself off as someone else may have been a symptom of the times.

Far from being the lawyer’s daughter she claimed, West was actually Edith Elliott, a sailor’s daughter from Deptford. In an age when divorce had become easier, coupled with the arrival of economic uncertainty and cheap travel, it made sense that if your life did not fit, it was more than sensible to change it.

As Stapleton’s investigation draws to a close, rather like the second reel of a silent movie, instead of Rudolph Valentino bursting out of a desert tent, West calmly locks her office for a final time, without even a goodbye to the various members of the family she has employed, let alone the more well-known people with whom she has crossed paths such as Dr Crippen and Dorothy L Sayers, and retires to life as a wife and mother in Cheam – wearing a twinset and pearls!

Despite almost endless frustrations, Stapleton sticks grimly to her task to provide a deliciously salacious glimpse of the underbelly of high society and partly chronicle the life of a determined and inventive woman making her own way against the odds.

Does it matter that West exaggerated and often downright lied in her presentation of herself as a truly larger than life character? Read this exhaustive investigation – and make up your own mind!