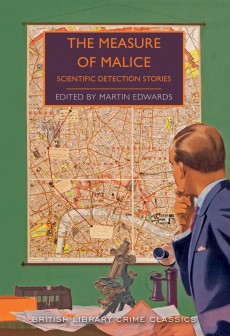 The Measure of Malice

A collection of 14 short stories illustrating how crime fiction reflected – and in some cases predicted – the use of science in crime detection.

A basic tool of policing in Britain today in major crimes such as murder is the Home Office Large Major Enquiry System – better known as HOLMES. The acronym is no coincidence. Conan Doyle’s Great Detective was emphasising the importance of scientifically obtained and verified physical evidence in criminal investigation while the Metropolitan Police were still struggling to come to terms with Alphonse Bertillon’s revolutionary fingerprinting system, and county and borough forces had hardly abandoned the bullhorn lantern and the horse!

Nowadays CCTV, DNA analysis, satellite surveillance and crime scene computer simulation are all part of the detective’s armoury, coupled with the traditional observation and the application of logic.

This anthology of 14 short stories, chosen and critiqued by crime writer, archivist of both the Crime Writers’ Association of which he is chairman and the president of the Detection Club, Martin Edwards, is a tribute to the part crime fiction has played in appropriating and popularising – indeed sometimes anticipating –   the advances of forensic science.

His selection of four from before 1920, another four written after 1940, with six from the Golden Age, gives a neat balance. Stories by R Austin Freeman, JJ Connington, Edmund Crispin, Dorothy L Sayers and the ultimate master of logical reasoning, Arthur Conan Doyle, lead a collection in which there are no real duds.

All in some way prove how rational thinking and the application of scientific or medical knowledge prove the power of the human brain to uncover the most carefully planned of villainous deeds.

It is, of course, totally unfair to single out any one for individual attention. But Conan Doyle’s 1891 The Boscombe Valley Mystery – the first Holmes short story to feature a murder – which Edwards has chosen to kick off the volume, features a solution which turns on footprints and cigar ash, a rat, a vanished grey cloth, the direction of a wound, and the use of that unmistakably Australian greeting ‘Cooee’, an innovative combination of physical and linguistic evidence.

While the plot itself is not Conan Doyle’s best – the killer stands out a mile – the intricacies of the case means Holmes relies on his research into the ashes of 140 different varieties of pipe, cigar and cigarette tobacco to unmask the murderer. This deceptively complex story highlights his use of science and cutting-edge technology at a time when police tended to rely on more circumstantial evidence. The use of scientific and technical know-how, now perhaps quaint or obvious, but fresh and exciting when the stories were written, makes Edwards’ point for him.

A trip to the dentist leads Lord Peter Wimsey to become embroiled in investigating an apparently accidental death by fire in Dorothy L Sayers’ In the Teeth of Evidence. As always there’s plenty of humour in this story, which starts with Wimsey’s teeth and ends with an exploration of the science of early forensic dentistry to offer the solution to a finely crafted mystery.

While the majority of stories are based on sound science a couple, although still entertaining, rely on more dubious reasoning. CE Bechhofer Roberts’ The English Filter relies on the ancient and popular pseudoscience of optography, the belief that a picture of the murderer is implanted on the retina of the victim. And LT Meade and Clifford Halifax’s The Horror of Studley Grange turns on some questionable, to say the least, psychology mixed with hints of the paranormal, although the underlying story is an intriguing exploration of madness, desperation and the mechanics of an impossible crime.

Some of the stories feature authors prominent, even best-sellers, in their own time who while no strangers to followers of the Crime Classics series, will be entirely new to modern crime fiction fans – another reason for reading this well-chosen and brilliantly edited anthology.