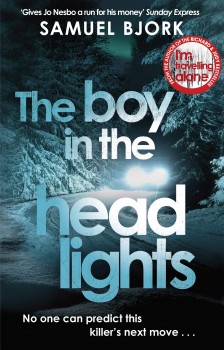 The Boy in the Headlights

Detectives Holger Munch and Mia Krüger are in search of a serial killer who targets random ordinary people. The pair struggle to predicts his next move but must deal with their own demons to stop the murders.

The Boy in the Headlights reunites a pair of detectives at different points in their lives, initially reluctant to get involved in another investigation. Their backstory has been fully explored in previous instalments of Samuel Bjørk’s series. I’m Travelling Alone and The Owl Always Hunts at Night proved to be tense, gripping and powerful police procedurals, focusing on personalities and terror. Even if you haven’t read the books, the author builds the narration around new shocking events and snippets of information that both add drama and invite you to go back to the earlier novels.
Here, in a smooth translation by Charlotte Barslund, Oslo’s Special Investigations detectives Holger Munch and Mia Krüger work on a case that baffles everybody. First Vivian Berg, a young and promising ballet dancer is killed, her body found floating in a mountain lake far away from the city. Then Kurt Wang, the jazz musician, is found dead in a hotel. Finally, a teenager, Ruben Iversen, dies in a car.
Each victim is killed in a similar manner and left at the scene with a camera on a stand pointing at them as if the murderer really wanted to make a show of his own skills and get attention from a terrified audience. References to The Brothers Lionheart, a Swedish fantasy book for children, might be a clue yet it does not fit in the profile. The use of chemicals to inject into the victims implies unnecessary cruelty and a sick imagination.
As Mia discovers that the lenses of the camera have a number scratched into them, the team expects that a solution to the motives and finding the perpetrator might be close. However, it’s a costly illusion. Even though the methods appear the same, the vicious randomness of the targets perplexes the police, excites the press and terrifies members of the public. When a cocky journalist becomes a messenger for the killer, the superior powers-that-be get involved, too.
It’s a long emotional journey until we find out how the titular boy in the headlights fits into the madness of the serial killer. The opening paragraphs describe what happened 14 years earlier when a lonely and frightened boy with a set of deer antlers strapped to his head was wandering in a wintery landscape. The situation has terrible consequences, and the thinking process behind the murders has been both inventive and totally weird. But there it is. The unexpected finale of the investigation delivers a decent and clever conclusion, yet something might be missing – but I am not going to spoil the end for you.
The relationship between the main duo is painted in all shades of professional and personal nuances, including Mia’s suicidal thoughts and deep trauma following her sister’s death from a drug overdose, and Holger’s messy fractured family life and outdated attitude to technology.
A brilliant police lawyer and a converted hacker contribute to the search and the racking up of the tension. The internal corruption subplot didn’t seem to add anything valuable to the main story, though, unless of course its purpose was to confuse some of the team’s members who already were in the dark a lot of the time, because the unpredictability of the killer targeting very ordinary people couldn’t be comprehended.