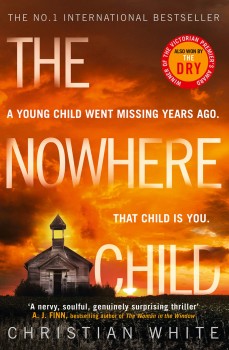 The stranger is just about to rewrite history – Kim’s history. And her entire life.

Twenty-eight years ago, Sammy Went, a cute, two-year-old girl disappeared from her bedroom in Manson, Kentucky. Jack and Molly, her parents, along with her older siblings, Stuart and Emma, were frantic, desperate for the safe return of their little cherub. But beneath the façade, they all had secrets. Secrets that could have been the catalyst for the little girl’s disappearance.
Today. Melbourne, Australia. A stranger approaches photography teacher Kim Leamy with a photo of a little girl. He tells her the picture is of Sammy West, the missing girl and that Kim is connected to her disappearance. And his next revelation rocks the foundations of Kim’s life when he tells her he has irrefutable evidence that she is Sammy.
Her younger sister wouldn’t know. Kim’s mother recently died of cancer, taking the truth with her. The only person who might have some facts is Dean, Kim’s supposed stepfather. But Kim will not find the reassurance she is looking for in her stepdad’s face; it is hidden by the guilt in his eyes. And the dreadful truth sends Kim on a dark and dangerous journey to her origins in Kentucky to find out how and why she was abducted and given a false identity all those years ago.
Although this is Christian White’s debut novel, he co-wrote Relic, a horror film, and co-created the TV series, Carnivores. The Nowhere Child won the 2017 Victorian Premier’s Literary Award for Best Unpublished Manuscript. A psychological thriller, a writer who has already dangled his toes in the ‘dark and nasty,’ and one who has won an award … my stomach rumbled impatiently for literary satisfaction.
The premise fascinated me and makes a refreshing change from the usual child-abduction stories. However, I was somewhat disappointed with the standard of writing, although it does improve a bit towards the end. There is far too much telling rather than showing, a vast amount of tautology, and even unintentional rhyme. It almost needs another round of editing.
The story explores several themes: love, loss, identity, cagey and duplicitous conduct, deceit, cult activity. In the end it feels like there are too many themes, and all are rather superficially handled because they depend on the characters and, other than Kim, the characters are one-dimensional. Worse, some are clichéd, including the cult leader with his rattlesnakes.
My main problem is that from the start, the author tests the reader’s suspension of disbelief. That a woman of nearly 30 turns her back on the only family she has known on the word of a complete stranger, whose only evidence could have been knocked together on a PC, beggars belief. A chapter of indecision and Kim doubting him might have helped. That said, Kim is a flawed but likeable character who grew on me.
I am against swathes of purple prose and description, but the story lacked a sense of place; a shame when this is a two-destination journey. However, I did enjoy the distinction created by the Manson people treating Kim as an outsider. I also like the disturbing edge that the cult presence gives to the plot and backdrop.
The plot twist is unsurprising and unrealistic, and there are clunking hints that give it away too soon.
Despite my criticisms, The Nowhere Child is a great read for pure escapism, one whose pace accelerates towards the end and can be consumed in one sitting.