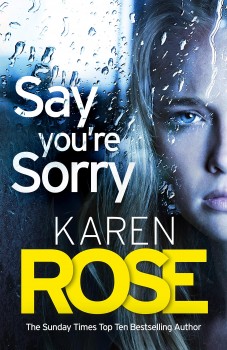 Daisy, a young woman, is attacked in the street, but fights the attacker off. Others are not so lucky.

Daisy Dawson is a close friend of a family of Russian immigrants, the Sokolovs, one of whom, Rafe, is a homicide detective. When Daisy is attacked in the street, the family surround her with love and care. In fighting the attacker off Daisy grabbed a silver locket that he wore around his neck.

Rafe knows that his great friend, FBI Special Agent Gideon Reynolds, knows about lockets such as this because he had lived, as a boy, in the cult of which they were a symbol. Gideon is also very close to the Sokolov family and takes on the role of Daisy’s bodyguard as well as re-opening an investigation into the now well-hidden cult.

Daisy and Gideon develop a very close relationship and indeed much of the book is focussed on this relationship. This book is marketed as the first book in a brand-new Sacramento series.  Anyone who is familiar with Karen Rose’s previous series will notice a big similarity in the style of the narrative: a complex group of people who are very close to each other, some of whom are employed by the police or the FBI; two of the people develop a very close relationship; when members of the group are threatened or injured the others all support and protect them.

Amidst all this and external to the group there is a killer. The killer’s story is told at the same time and inevitably members of the group and the killer come together in a denouement. Of course, it may be that only this first book of the new series follows the pattern. But it is a shame that the structure is so predictable.

The main feature of the story is the developing relationship between Daisy and Gideon, and a great strength of the narrative is the way in which the reader is made to feel the emotions of the characters, both good and bad. By linking the emotions to body language, there are tangible outcomes. For example, Daisy constantly pets and cuddles her dog as a way to help diminish her panic attacks and these cuddles are absolutely graphic as she places the little dog under her chin or constantly strokes her; similarly, with her physical contact with Gideon, touch is very important to them in giving each other support and encouraging each other to talk about their past lives, however difficult.

The cult in which Gideon was brought up is a thread that runs through the novel and his horrific experiences from that time are difficult to talk about, despite them being relevant to Daisy’s attack.

So overall Say You’re Sorry is a very readable and thoughtful book, if rather predictable.