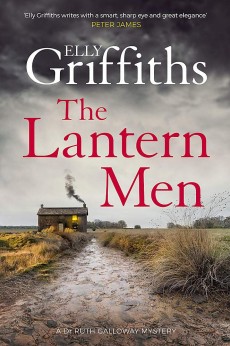 Dr Ruth Galloway has a new job and a new life in Cambridge. But a murderer’s confession drags her back to north Norfolk to work again with DCI Harry Nelson, the father of her young daughter.

Elly Griffiths’ thoroughly enjoyable Dr Ruth Galloway series is rather like a classy soap opera. We’re now up to number 12 in the series, and seemingly the only character without a tangled love life is the cat!

There’s a two-year time lapse between The Lantern Men and the previous book in the series. Ruth has left the University of North Norfolk for a new job at the University of Cambridge and is now shacked up in the city with American beau Frank. Daughter Kate is now nine.

But any intention to put distance between her and lugubrious DCI Harry Nelson – Kate’s father – so that he can concentrate on his marriage to Michelle doesn’t survive the first contact with the enemy.

In this case the enemy is Ivor March. He’s been convicted of the murder of a number of women, but Nelson is convinced he killed more than he was charged with. Then March says that this is true and that he’ll tell the police where the other bodies are – just as long as forensic archaeologist Ruth does the digging.

This series has always worked best when Ruth is on home ground, and where East Anglian history and legends are to the fore. In this case, it’s the sinister Lantern Men who give the book its title. Griffiths’ plots are never less than serviceable, but her strength is absolutely the way she nails the atmosphere of the area and her sure-footed characterisation.

As usual she stays this side of Corrie and provides characters who I’m totally invested in. She even has me sympathising with the potentially annoying ones like Cathbad the faintly sanctimonious druid and Phil, Ruth’s former boss, who is desperate to be seen as an expert.

I was rather amused by Ruth discovering that students are pretty much the same whether it’s Oxbridge or a new university – they’re just more confident at the former. And I spotted a thank-you to a former colleague, so you can be sure the university advice is accurate!

There’s no great surprise in what happens, but Griffiths does make you think about friendships, loyalties and relationships. As always, it’s the characters and the ride that make this a series to savour.