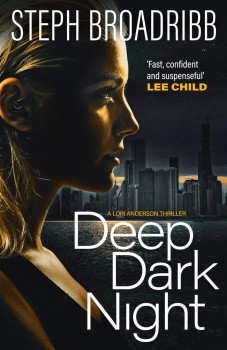 Bounty hunter Lori Anderson is forced to do one last job for shady FBI agent Alex Monroe – take on Chicago crime boss Cabressa in a poker sting and get enough evidence to put him away for good.

Bounty hunter and single mother Lori Anderson is back for a fourth outing in Deep Dark Night. Much against her better judgment she’s doing what’s meant to be one last job for FBI Special Agent Alex Monroe, a man who couldn’t find the right side of the tracks with a roadmap, a torch and both hands.

Lori doesn’t trust the man an inch, but she’s committed to doing a job for him, which means leaving her beloved daughter Dakota with a friend and working off the books with her former partner and lover, JT, the man who taught her all the tricks of the trade. The man who happens to be Dakota’s father, even though Dakota doesn’t know that yet.

The job is to obtain enough evidence to secure the conviction of the head of the Cabressa crime family using a priceless gold chess set as bait in a high stakes game of poker. Lori is by no means convinced that she can pull the job off, but with a crash course in the card game and JT as her back-up, Lori puts her head in the lion’s den, which in this case is an luxury penthouse at the top of the Skyland Tower, an exclusive building with staggering views over Chicago.

Lori is wired with high-tech kit that Monroe claims will be undetectable, and must rely on her wits to survive in a clash over cards in a game run by society hostess Carmella Davies. Her brief is to go head to head with Cabressa, but ultimately cede the chess game to him. Lori isn’t at all sure she can survive that long in the game against a bunch of experienced players, all with their own reasons for wanting – and needing – to win.

She is already badly on edge at the climax of the intended sting when the penthouse, and the rest of the city, is abruptly plunged into darkness, triggering the lockdown of the whole penthouse as it turns into one large panic room. The only problem is that someone has their own agenda – to reveal the identity of the master criminal known only as Herron, who is rumoured to be challenging Cabressa for mastery of the city.

Steph Broadribb deftly sets up a very real locked room mystery in which the poker players have to reveal their own secrets and unmask Herron at the same time. No one trusts anyone, and it seems no one can be trusted. It’s only a stroke of luck that sees JT in the penthouse with Lori when it goes into lockdown, but they’re unarmed, pitted against ruthless players with everything to lose and the rogue card of a gun in the room.

Lori Anderson is one of the great female characters of the crime genre, and Steph Broadribb seems utterly at home in her chosen US setting, despite her own UK roots. One of the things I like about the books is the way she allows Lori to survive on her wits without ever feeling the need to hit her character with the stupid stick for the sake of the plot, although I did question the wisdom of an dive off a bridge into a bone-cold river in the middle of the night! She sets up a situation and then plays it out in a way that seems utterly unforced.

The other card players are equally well-drawn, especially the deeply calculating Cabressa whose flashes of deadly brutality come as a salutary warning that the seemingly urbane exterior hides a vicious killer. But he’s not the only killer in the locked-down penthouse and if the trapped group don’t succeed in unmasking Herron, they’ll all die as the oxygen starts to run out when the puppet master in the deadly game shuts down the life-support systems one by one.

Deep Dark Night marks a definite departure from the previous chase thrillers that Broadribb has excelled at and shows that she can turn her hand to a very different setting but still provide constant tension punctuated by sharp adrenaline flares. Lori and JT make a formidable team, but I’d be the first to admit that they’re operating at the very end of their not inconsiderable tethers in their latest outing. If you’ve missed the earlier books, I wouldn’t worry about it. Deep Dark Night still works well as a standalone.