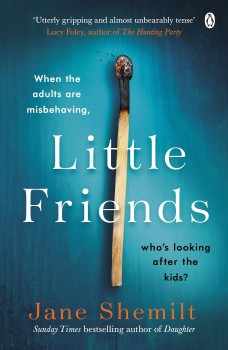 Three couples and their children spend one long hot summer in each others' pockets – but even as they make merry an evil presence is infiltrating the party.

Jane Shemilt returns to some of the themes of her bestselling novel Daughter in this absorbing story of three very different couples and their offspring whose lives become entwined.  Once again it is the mother/daughter relationship which is the key ingredient in this mystery.

The author is an ex-GP who gave up her career to pursue her writing. And as a wife and mother with five children she writes from experience and with authenticity. You believe that she understands family life and the importance of female friendships - and her words ring true.  However, she isn't afraid to explore the darkest side of such intimacies.

The three couples are earth mother Eve with her stoical husband Eric and their three children – daughters Poppy and Sorrel plus baby son, Ash. African-born Grace is married to successful, but broke, novelist Martin and they have a son and daughter Blake and Charley. Fragile Melissa is with her abusive husband Paul and beautiful but enigmatic daughter Izzy. Brought together by Eve's Saturday lessons for dyslexic children they form a close, too close, and ultimately deadly bond.

The action takes place from May to December and ranges in location from Eve and Eric's rambling London house to a very evocatively drawn holiday home in Greece to a shared refuge in Wiltshire.  The story is told through the eyes of the three women – Eve, Grace and Melissa – interspersed with italic passages which shows events from the children's point of view.   Although Shemilt is very good at realistically conveying domestic detail and the nuances of adult relationships she doesn't shy away from upsetting episodes and some truly horrific moments.

At first it may seem that we are reading about flirtations and intimacies which lead to the children being allowed more freedom than is necessary or wise. But it soon become apparent that real evil is a lurking presence in this story - and the author isn't afraid to give evil its head in a series of distressing tragedies.

The true perpetrator of these evil deeds is not revealed until the very end of the story although the denouement came as no surprise to me.  But I was drawn through by the very credible portraits of the three women. And even as they betray each other and have to endure unbearable griefs, I really wanted to know if their friendship could survive.

This is an engrossing drama, well written and encompassing big themes which include adultery, sexual violence and madness. There is even have a trial for those of us, like me, who love a courtroom.