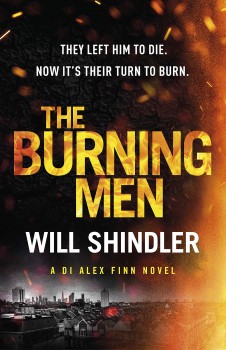 A killer is targeting former firefighters who attended a notorious blaze in a London tower block that burnt down whilst construction was in progress. DI Alex Finn and his new sidekick, DC Mattie Paulson, need to work out why the men are being killed.

In a genre that seems beset by protagonists with unusual – to put it mildly – names, and enough angsty backstory to put a Greek tragedy to shame, it was refreshing to meet DI Alex Finn and his new partner, DC Mattie Paulson. Finn’s emotional baggage is straightforward – his wife has recently died of cancer and Finn is back on the job too soon, but he thinks he can cope, and when a new murder investigation comes along, his boss doesn’t try too hard to keep him at home.

A man burned to death at his own wedding celebration gets the book off to an intense start. Schindler takes enough time to set the scene so that the man’s death comes as punch to the gut rather than simply being a convenient body to hang the story on and that’s where he goes to the top of a crowded class. My pet hate is books where the method of killing and the state the body is left in is given more page time than the victims, so for me, a book that features serial killings is a hard sell, but The Burning Men hooked me from the start and never gave me second thoughts.

It’s made clear early on that the killer is targeting a group of firefighters who, five years ago, attended the fire at a high-rise construction site, and then soon after, they all left the service, intending never to see each other again. They’d all run into the building in the hope of saving a man seen at a window, but he was never found. That was the official story, anyway. The unofficial story takes a lot longer to get at, and Schindler managed to keep me guessing right to the end.

In what is said to be the start of a new series, it’s nice to be able to report that both Finn and Paulson are characters I was happy to get to know. Alex Finn’s stiff upper lip wobbles enough times to make him come over as a decent bloke who’s come back to work too quickly but is determined to just get on with his job.

Mattie Paulson is more of a dark horse. She’s carrying around a moderate-sized rucksack of angst from a previous posting and it’s clear that her partner Nancy finds her hard work at times. Mattie isn’t keen on having her private life on display and comes over as emotionally very self-contained, which puts a strain on their relationship. The fact that Mattie is gay is not a big deal in the book, and it’s good to see better LGBTQ+ representation in crime fiction now in a way that doesn’t make the character’s sexual orientation their only defining characteristic. There’s plenty of tension between the two, and watching how they work together was one fascination amongst many.

The plot of The Burning Men is complex and the denouement is a fitting climax to an excellent police procedural. The good guys and the bad guys get well and truly mixed up at times, which is something I always enjoy and there were some parts where I was practically yelling at the page in the hope of alerting some characters to the danger they were in.

Although this is Will Shindler’s debut novel, he has a writing pedigree which includes a decade working as a scriptwriter on my favourite police drama, The Bill. The sharp scenes, good pacing and deft characterisation mark this as a series to follow.