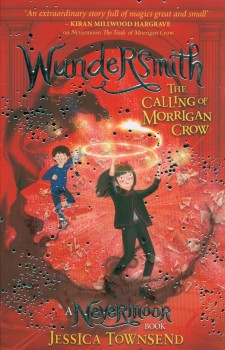 Wundersmith: The Calling of Morrigan Crow

Morrigan Crow has settled into life in Nevermoor, but there is someone who wants to expose her deepest secret. And then there are the disappearances to contend with …

Former Cursed Child Morrigan Crow is now a member of Nevermoor’s prestigious Wundrous Society and proudly wears a small lapel pin W to signify this. Morrigan might have escaped what she always believed to be her destiny, to die at the end of her 11th year of life, but life at her new school in WunSoc is anything but straightforward – few things in Nevermoor are.

New pupils are grouped together in units, Morrigan is in Unit 919, along with seven others, each characterised by a certain knack. There’s a pickpocket, a mesmerist, a gastronomist, a linguist, a healer, a fighter and a dragonrider. Her friend Hawthorne is the dragonrider, but he’s the only one Morrigan doesn’t view with suspicion, and her suspicion of the others only deepens when blackmail notes start to arrive, threatening to expose the secret harboured by one of the unit if the blackmailer’s instructions aren’t followed to the letter.

At first, the unit pulls together, and Morrigan is grateful for that, as she’s harbouring the biggest secret of all – that she’s a Wundersmith, and everyone knows that all Wundersmiths are evil. After all, one of her teachers, a half-man, half-tortoise, spends several days a week drilling that lesson into her as he parades a seemingly endless litany of awful acts committed to then in front of her horrified eyes.

And to make matters worse, Morrigan has to contend with visits from the most evil Wundersmith of all, the dreaded Ezra Squall, who claims to be the only person who can show Morrigan the true nature of Wunder.

Morrigan deepens as a character, although we don’t see quite so much of the enigmatic Jupiter North, who breezes in and out of Mog’s life – as he calls her - like a ginger-haired tornado as he tries to get to the bottom of a series of disappearances, starting with that of the angel Cassiel.

Jessica Townsend serves up an excellent sequel to the delightful Nevermoor: The Trials of Morrigan Crow. Wundersmith is darker, deeper and at times distinctly unsettling, but there’s plenty of laughter too, with the sarcastic oversized feline, Fenestra the Magnificat, taking the honours in that department. Townsend deftly blenders humour and horror. The Museum of Stolen Memories, which captures and displays the dying moments of numerous luckless individuals, is as original as it is awful, as is the Ghastly Market, which hosts a thriving trade in outlawed objects, creatures and even people.

The story builds gradually. Morrigan’s teachers and her fellow pupils are all well-defined and slowly but surely their lives started to matter to me. It’s never as well to get too comfortable in Nevermoor, though, as beauty walks hand in hand with danger, and the story starts to gather pace towards a terrifying denouement, in which there is no certainty of a happy ending. This is a stunningly original teen series that can hold its own in any company.