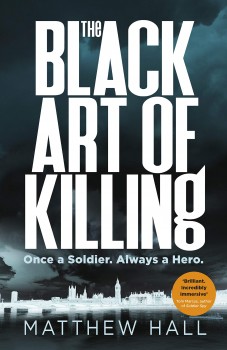 The Black Art of Killing

The death of an old comrade drags former SAS Major Leo Black back into a world he thought he’d left behind.

Dr Leo Black has left his army days behind – or so he thinks. Now he’s a lecturer in military history at an Oxford college, hoping to gain a permanent position. But everything changes for him when he’s told that Ryan Finn, an old friend from his army days, has been killed in Paris whilst on a bodyguarding contract, and his principal, a brilliant young female scientist, has been snatched.

Black goes to see the man’s widow and offers to do the unpleasant job of formally identifying the body. Understandably, Finn’s widow wants to know why he was brutally killed, and when Black is contacted by his former commanding officer in the SAS, Freddy Towers, nicknamed Fireballs, he starts being inexorably drawn back into the fold of his former life.

Scientists are going missing and the security services appear to have sprung a leak, so Towers wants someone he knows and trusts on board to help him plug the leak and stop the enforced brain-drain. Black is reluctant to get involved, but gradually Towers, who’s something of a force of nature, reels him in and Black reluctantly agrees to help.

The adrenaline rush of potentially deadly action soon floods back, proving that Black has lost none of his edge, and it’s soon clear that he’s not lost his ruthless streak, either. Matthew Hall paints a convincing picture of this former elite solider turned equally elite academic. When Black isn’t working amidst Oxford’s iconic spires, he’s spending time at his small cottage in the Brecon Beacons, although it’s the latter that seems more like his natural habitat.

Not everyone approves of Black, though, and it quickly becomes clear that he’s going to struggle to gain the permanent position he’s so keen on. Keeping himself to himself isn’t enough to win friends and influence people, and Black knows that he is dependent on a lecture he’s scheduled to give at a prestigious conference in the States. His position worsens when letters start arriving to the Provost of his college, implicating Black in war crimes said to have taken place during the Gulf War. This is when the protection that Towers can give becomes a necessity.

The Black Art of Killing is a competently written military grade thriller, with an interesting – although not terribly likeable – main character. The combat details come over as well-researched, although I was amused by Hall’s description of the SAS base at Credenhill near Hereford when he commented that the only thing that distinguished it from other military bases was the conspicuous lack of signs at its entrance. It wasn’t like that last time I drove past, as there was a honking great big sign just outside with an arrow pointing to ‘Stirling Lines Barracks’.

The problem I had with Black, though, was that the more the book went on, the less I liked him. It’s not that I’m squeamish about action sequences in military thrillers, and given a choice, I’d happily exist on a diet of Andy McNab, Chris Ryan and the like. But I have to have some empathy for the main character, and I found that I ended the book without much of a connection to Black. But that aside, there’s a good mix of action and introspection.