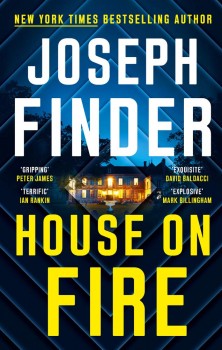 After the death of an old army buddy, intelligence agent Nick Heller investigates the family behind the pharmaceutical company whose opiate medication lead to his friend’s death.

Joseph Finder has produced a string of thrillers and this is the fourth featuring Nick Heller, a Boston-based private intelligence agent. Heller doesn’t advertise and keeps a low profile, but aided by his assistant Dorothy and one or two adepts at the dark arts he provides services for friends who find him by word of mouth.

Heller’s interest in the Kimball family and their pharmaceutical company is awakened when Sean, an army friend who once saved his life, dies of an overdose of Oxydone, an opiate inhaler which has made them very rich. At Sean’s funeral he is approached by Sukie Kimball, the founder’s daughter, who seeks Heller’s help in obtaining evidence which will show that her father Conrad buried trial results demonstrating that Oxydone was dangerously addictive.

With this end in view Heller travels to the Kimball mansion posing as Sukie’s boyfriend. He is surprised to find there Maggie, a woman posing as the girlfriend of another of the siblings, who he knows to be working under an assumed identity. That night the pair visit Conrad’s office seeking the crucial file, but in the morning Maggie is discovered dead in the grounds, her neck broken.

Heller has a history with Maggie and is now determined more than ever to expose the deception behind the Kimball fortune. Conrad has plenty of resources, however, and is ruthless about protecting his interests. His children are not to be trusted, and someone has hired an Israeli firm of thugs to monitor Heller’s movements, who turn out to be very hostile.

Heller has both military experience and skill in the arcane arts like lock-picking, so makes rapid progress against a well-equipped foe and there are plenty of tight moments for him to demonstrate quick-thinking. We also hear enough about his help given to Sean’s family and to his resourceful assistant Dorothy with a personal matter to establish him as a nice guy prepared to exert himself for his friends. And this is despite a morally suspect father now serving time for fraud, the subject of a minor sub-plot.

The main story is a fairly obvious invention arising from the current alarm about the abuse of opiates in the US; the drug companies clearly bear some of the blame for this although perhaps not as directly as implied here. The Kimballs do, however, make a suitable foil for the hero, whose exploits lead to plenty of nail-biting moments even if Heller does seem a bit too good at everything to be entirely real.

I particularly enjoyed Heller’s internet wizard Merlin, who when in the military would prepare for operations by doing ‘Sudoku, super-advanced black-belt stuff.’ Also trained in the deadly art of origami, no doubt.