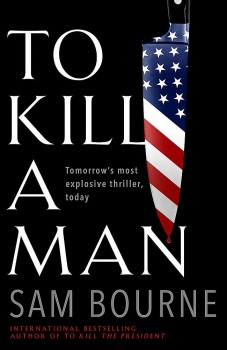 To Kill a Man

A candidate for the presidency aggressively defends herself from assault in her Washington home. White House troubleshooter Maggie Costello is asked to substantiate a defence.

This latest thriller from Sam Bourne is the last in a trilogy which encompasses the realities of the Trump era. Here, the plot invites the reader to consider the vulnerability of women to sexual predators and the lack of means of effective redress in the vast majority of cases.

It begins with a rising star in American politics, Natasha Winthrop, alone in her house one evening. A masked man makes entry with the intention of rape, but before long is dead. The news makes Winthrop a hero, and when police arrest her there is a Twitter storm of protest, reinforced when it emerges that her attacker had a history of previous attacks.

The attitude of the police and the public change, however, when it is leaked that Winthrop had been using websites specialising in violent sexual fantasies. Winthrop asks Maggie Costello, a Washington insider praised for her expertise in crisis management, to help her, and gives her carte blanche to delve into her own files to gain an understanding of what Winthrop is all about.

Costello’s research reveals that Winthrop’s background and her activities related to sexual assault on women are indeed far more complex than has yet to emerge in public. Her feelings about her client wax and wane, but are solidified when she comes under pressure herself from men who are being manipulated by a shadowy online presence seemingly dedicated to stopping her by any means necessary.

This is a thriller which feels very much of the moment, with events around ‘celebrities’ enjoying a storm of tweets in a matter of minutes, and fake news being promulgated by those with an axe to grind, or who wish to provoke discord. Some pretty impressive computer hacking is involved too.

We are also taken inside the political machine, specifically to the presidential campaign being run by an experienced male who fears Winthrop as a competitor. His campaign manager and a bevy of aides sample public opinion and run mock debates to plumb the depths of his threadbare set of aphorisms, much of which is very funny despite probably being closer to the truth than one would hope for.

The author acknowledges specialist guidance on the above matters, and also on the statistics on conviction rates for rape, which as he rightly says are appallingly low even in countries where women might expect to be better protected. Winthrop’s answer to this is superficially attractive but in truth very fanciful.

But these issues are at least raised in a way that provokes a little thought, and well wrapped in a gripping and gradually unfolding story about Winthrop as the central character which impels the reader to push on and get to the truth.