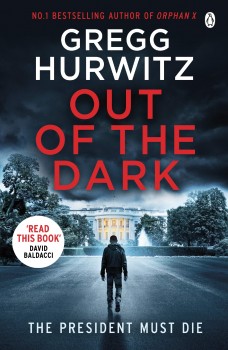 Out of the Dark

Why is the corrupt, dictatorial President of America trying to kill every member of a team of ‘deniable intelligence assets’ – assassins – he helped create? Orphan X, Evan Smoak, must find out – and stop him.

Out of the Dark is the fourth – and probably the best – book in Gregg Hurwitz’s Orphan X series, almost 500 pages of blistering action, searing character development, hi-tech wizardry and a complicated, fast moving plot with plenty of twists and a surprise ending. Evan Smoak was taken from a group home at the age of 12, was raised and trained as part of the Orphan Programme, a deep black operation to create ‘deniable intelligence assets’ – assassins.

After years in the field and many successful missions against America’s designated enemies, Evan, Orphan X, broke away. He’s been designated an international war criminal and uses all the skills he had learned to disappear, reinventing himself as the Nowhere Man, a 21st century version of the Caped Crusader, who helps the truly desperate victims of crime when no one else can.

Now someone at the highest level of government is trying to eliminate every trace of the Orphan Programme by killing all the remaining members and their trainers.

After Evan’s mentor – the only father figure he ever knew – is killed, he decides to strike back. His target is the man who started the programme, now the most heavily guarded person in the world – the President of the United States!

The corrupt and dictatorial President Jonathan Bennet knows Orphan X will come after him and counters, re-activating the one man who has the skills and experience to track down and kill Orphan X – the programme’s first recruit Judd Holt, aka Orphan A, backed by a  team of a team of vicious criminal misfits. For his own protection he assembles every available secret service agent, led by SAC Naomi Templeton, whose own dying father had been a legendary head of the Service.

With Evan devoting all his skills, resources and intelligence to find a way through the layers of security that surround the President, he also has to protect himself against the deadliest of opponents in a battle to the death, Orphan versus Orphan, with the future of the country at stake.

With near-constant, usually pretty much over-the-top action, Hurwitz balances the brutality and gore by showing Evan’s softer side, something he struggles to understand, with his near-romance relationship with his neighbour and a sub-plot involving Trevon Gaines, a high-functioning autistic, whose whole family have been wiped out because he unwittingly cost a major criminal a multi-million dollar shipment of drugs, who seeks help from the Nowhere Man.

Characters from earlier in the series return, Joey, the girl tech expert and super hacker and Candy McClure – Orphan V – with whom Evan has a mixed and violent past as this tightly plotted, efficiently written, totally impossible but curiously plausible,story builds to a climax.
This is a great action-thriller read, but you, may need to be a tech-nerd to follow some of the more involved devices and schemes Evan and his collaborators employ!