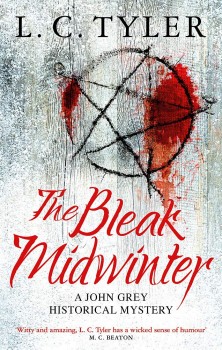 Civil war intelligence officer John Grey, now lord of an Essex manor, must discover the truth of the killing of a local lothario in order to save the life of a woman accused of witchcraft.

LC Tyler’s earlier adventures of former Cromwellian intelligence officer-turned-lawyer and occasional Restoration spy John Grey were occasionally stilted, but this dark story, the fifth in the series, is superbly set, plotted and structured and with its pace maintained throughout.

Grey, knighted for his efforts on behalf of Charles II’s devious Secretary of State and spymaster Lord Arlington, is now lord of the manor and a Justice of the Peace in the Essex village where he grew up. In the bitter winter of 1668, the village is cut off from the rest of the country by a heavy snowfall. The body of local lothario George Barwell is discovered in the woods, his face horribly disfigured.

Almost immediately rumours spread that the killing is the devil’s work, channelled by reputed witch Alice Mardike, who has allegedly been heard to curse him. Barwell’s father-in-law, a hard-nosed leading local grazier, inflames the villagers into kidnapping Alice and, following the old custom to detect witchcraft, ‘swimming’ her in the millpond.

Grey, whose duties as a JP oblige him to investigate the death, intervenes to stop a mob killing. But with a near-hysterical local population demanding her death and no reinforcements available to enforce his will, agrees to a time limit. If he fails to solve the mystery within a week, Mardike will be tried for witchcraft – with conviction and sentence already decided!

Amid a whirl of plot and counterplot Tyler juggles his characters, story, wit and pithy one-liners with perfect balance. Grey is made the more human by his reaction to the death of his mother and his relationship with London playwright Aminta, which has blossomed with marriage and the birth of their son. The astute Aminta’s father, former dashing Royalist cavalryman Sir Felix Clifford, now living with the couple, has plenty to contribute, but again it is the formidable and sharp-thinking Lady Grey who is quicker to pick up on clues and rumours than her rather more by-the-book spouse.

But it is the setting and the people of Clavershall West with their superstitions, petty feuds, rivalries, jealousies and resentments who make this such a gripping read. Almost all have dealt with Alice for her folklore medicines, but the very mention of witchcraft – memories of Matthew Hopkins, Cromwell’s Witch-Finder General, who had a productive and profitable visit to the Essex-Suffolk borders – have instilled fear to the point that they allow themselves to be whipped into a fervent, volatile mood where they bray for her hanging.

Some have good reason to see Alice scapegoated. Others have secrets or their own motives for wanting Barwell dead, and Tyler exploits these feelings to introduce a real sense of claustrophobia, bordering on hysteria, as the snow and ice keep the village in complete isolation.

This atmospheric and gripping mystery, certainly Tyler’s best so far, is based on some impressive research on witchcraft in the 17 century and it’s well worth reading the notes at the end of the book where the historical facts and documentation are clearly explained.

Apart from a cracking story, Tyler also manages to, almost in passing, highlight the appalling conditions for women – particularly country women – at the time. The prejudice, misogyny, the abuse and persecution, their inability to live the life they chose – and the constant threat of being branded witches on the flimsiest or no evidence at all which could lead them to a gruesome end – all help to make this a stand-out book for me.