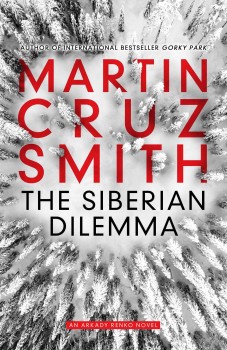 Investigator Arkady Renko travels to the frozen tundra to seek his on-off lover, investigative journalist Tatiana Petrovna, who has disappeared.

A fisherman falls through the ice. If he stays in the water, he will die of hypothermia in five minutes. If he pulls himself out, he will die in the below-zero air in a minute at most. What does he do? Act positively and die quickly, or passively accept his fate? That’s the classic Siberian dilemma.

This theme of ‘is it better to do something than nothing’ runs through Martin Cruz Smith’s latest adventure for Senior Investigator Arkady Renko of the State Security department of the Moscow police. This ninth in the Renko series, a tale of billionaire oligarchs, oil, frozen tundra, politics, bears, chess, corruption, shamans, superstition, intense cold, violence and murder, is as good as anything Smith has ever produced.

It is absolutely full of an atmosphere you can almost grip – and for us stay-at-home readers has an authenticity which we can only imagine to be the reality of Vladimir Putin’s Russia, a country he has ruled single-handedly for even longer than Stalin.

Renko, surely one of the most compelling figures in modern crime fiction, travels deep into the frozen wastelands of Siberia to interview a Chechen separatist accused of trying to murder the detective’s corrupt boss. He has his own reasons for wanting to go. His on-off lover, investigative journalist Tatiana Petrovna, has not been seen or heard from since she left for the same area weeks before to investigate the background of a secretive but immensely popular oil billionaire who intends to stand against Putin in the forthcoming presidential election.

Tatiana has often ‘disappeared’ during assignments – but Renko knows her enemies and the lengths they will go to keep a dissident quiet. Other writers who disputed the official view of Russia have been threatened, some murdered and some are just ‘missing’. He sets out for Irkutsk to find her and bring her back, but almost immediately discovers the case he was sent to deal with is little more than a farce – the product of the love of the security authorities for beating a confession out of a suspect rather than relying on evidence.

In a frozen land of shamans and superstition where monsters are said to patrol Baikal, the deepest lake in the world, and rival fabulously wealthy oligarchs, many with criminal backgrounds, founded on huge oil deposits, Renko knows he will need luck and all his wits to save himself and get Tatiana out alive.

Smith’s deft touch, light humour and depth of knowledge are, as always, displayed to their full on a shortish, but grittily realistic plot, with the threat of one-party Russia hanging like a dark cloud in the background. His gift for characterisation makes even the lesser players interesting. Readers may recognise one of the battling oligarchs as a none-too-heavily disguised Roman Arkadyevich Abramovich, now an Israeli citizen, one of the world’s richest men, owner of ‘Chelski’ football club and former governor of the region of Chukotka.

If you want to pick holes, Smith uses imperial measurements. He’s been writing about Russia long enough to know the difference between a foot and a metre. This leads to some strange anomalies – a bear over 29ft tall and a Russian claiming something is four feet long. But none of this should detract in any way from your enjoyment of what is another superb Renko story.