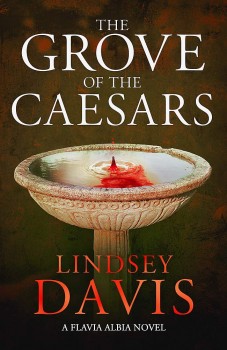 The Grove of the Caesars

Flavia Albia becomes involved in the hunt for a serial killer operating in the gardens left to the people of Rome by Julius Caesar. At the same time, her parallel investigation into fraudulent Greek philosophical texts leads to another killer.

Lindsey Davis, the undisputed market leader in the crime in Ancient Rome genre, continues to turn out winner after winner. Counting the unbelievably popular Falco series, which spawned the adventures of his adopted London street-child daughter Flavia Albia, she has now produced 28, covering a period of more than 40 years in the history of the vibrant, squalid and dangerous heart of the Roman empire.

Each one immerses the reader in Roman life and positively crackles with knowledge of the city and its people, ingenious and bloody plots and sharp observational skills with more than a smattering of genuine wit.

A long-time Falco fan, I was hooked on his strong, smart, determined and undeniably chippy daughter the moment I read the first of the Flavia Albia books, The Ides of April. She has never let me down – amazing inventive plots, plenty of action, buckets of blood, great backgrounds and some sharp historical social comment on slavery, immigration and a woman’s place in the Roman social structure.

Julius Caesar left his magnificent gardens to the citizens of Rome, a sanctuary of peace and tranquillity across the Tiber. Now, very much on the wrong side of the river for the gentry and ordinary citizens, the gardens and their sacred grove are dangerous haunts for lone women, rife with prostitution, exploitation, thuggery and murder.

Flavia Albia is left alone to supervise her husband’s building project in an old grotto when family problems force him to leave Rome. The work uncovers a cache of tattered papyrus scrolls, allegedly written by unheard of ancient Greek philosophers. What looks like an opportunity for her father’s auction house turns into the investigation of a fraud aimed at monied and vain collectors of ancient manuscripts. But hardly has she begun to make inquiries when a wealthy businessman hires the grove for a birthday party at which his wife goes missing, before being found naked, horribly abused and strangled yards from Flavia’s worksite.

On the same night, two louche dancing boy slaves, given to her family by the brooding Domitian, also vanish in the gardens. Albia learns that a serial killer targeting women has haunted the gardens and grove for many years.

The investigation should be run by the dubious Seventh Vigiles cohort, known for their corruption, idleness and inefficiency. There’s a new investigator and beefed up by the sinister imperial agent Julius Karus – a man who thinks confessions are best obtained by torture and who in the past has been happy to carry out assassinations at his master’s behest  – who she has come across before.

Sympathy for the dead women and their grieving relatives keeps Flavia Albia on the case, even if means working with the loathsome, arrogant Karus, and nothing will stop her until the serial killer is at last brought to justice. At the same time her hunt for the possible scroll fraudsters overlaps the garden killings and assumes a life of its own, leading her into another investigation of several previously unexplained deaths.

Flavia’s Rome is gloriously real and sinister in equal measure. Its glories are balanced by its brutality, poverty, filth and criminality. Her lively prose, often biting wit and fascinating and unique historical detail make this a compelling and enthralling read.

The key to the success of both her main protagonists, father and daughter, is that both have steadily matured throughout their careers as informers – Flavia Albia on occasions now sounds exactly like her strong, intelligent adoptive mother, the senator’s daughter Helena Justina. Keeping the main protagonist fresh is the key to the long-term success of any series and once again Davis manages this with absolute style and ease.