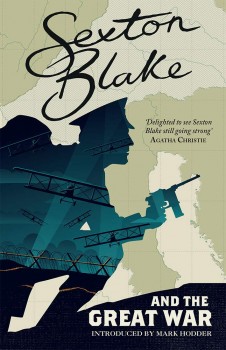 Sexton Blake and the Great War

Ace detective Sexton Blake returns in three republished stories of his activities before and during World War I.

Five hundred million copies of stories by almost 200 authors worldwide! Stage and radio plays, films and television series beyond count! Dorothy L Sayers called his sagas ‘the nearest approach to a national folk-lore.’ After more than 70 years of continuous publication, Sexton Blake, the doyen of squared-jawed English detectives, fell out of favour. Now he is back in print in the first volume of a new series which should reinstate one of literature’s greatest sleuths to his proper place in the pantheon of the greats.

For nearly a century, Blake was the most written about character in British fiction. But can this publishing phenomenon, read by young and old alike and fondly remembered by the older generation, survive, let alone flourish, in today’s Britain?

He is stunningly politically incorrect, positively jingoistic and more than borderline racist. His mores are those of an empire on which the sun never set. He is also intensely patriotic and a gentleman at all times where the ladies are concerned.

One of the problems is actually introducing him to this new generation. But Mark Hodder, the creator of Blakania, the Sexton Blake Resource, solves the problem ingeniously in this first officially sanctioned Blake novel published in nearly half a century.

He ignores the march of time and interviews the prince of detectives – who by now must be the world’s oldest man – allowing him to choose the three of the best stories, all originally published in the long-defunct Union Jack magazine, covering his activities in the immediate run-up and during the first world war.

In The Case Of The Naval Manoeuvres, a 1908 story by Norman Goddard, Blake catches Kaiser Wilhelm of Germany spying on British naval manoeuvres. After various adventures, including a fight with the Kaiser on top of a moving train and hanging by rope from an airship, he eventually forces the German ruler into a meeting with the British Prime Minister which at least postpones the start of war.

In Cecil Hayter’s On War Service (1916), he is in Belgium and Holland delivering a vital despatch to a secret agent. Using both brains and brawn, he foils enemy spies and escapes a firing squad to fulfil his mission.

A year earlier William Murray Graydon produced a story featuring his young assistant Tinker. In Private Tinker ASC the young man joins up under an assumed name and is sent to the front. Blake himself enters the battle zone and is shot. But Tinker shows just how well he has learned from his master, flying a reconnaissance mission, surviving a behind the lines crash, wrecking enemy trains, liberating French prisoners, foiling sabotage and rescuing a colonel!

It’s all enjoyable hokum! Whatever your views on Blake’s politics, he makes Jack Reacher look like a bungling amateur. This is a fascinating insight into the mind of a generation long gone and if you really like the action crime genre should definitely not be missed.