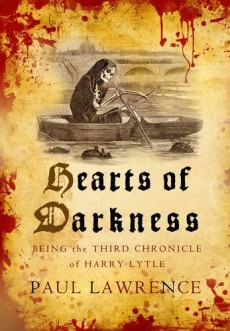 With the Great Plague having burnt itself out in London, Harry Lytle is ordered by spymaster Lord Arlington to an Essex village where the disease is still breeding to track down a traitor and bring him back alive.

Fiction authors take liberties with historical fact, but having borrowed Conrad’s title to recreate Marlow’s journey in Heart Of Darkness and somewhat altered the timing of the 1666 Great Fire of London, Lawrence commits an even worse crime. There is no better portrayer of Restoration England, its rivalries, betrayals, violence and vice, but after being so accurate and horrifyingly descriptive in most areas, he then borrows a hilly, boulder-strewn and wooded Derbyshire village and plonks it down in the flat lands of north-east Essex!

Despite this, the third Harry Lytle chronicle is as entertaining as its two predecessors. As the Great Plague dies out in London but spreads its grip outside the city, Harry and his friend, the huge Bible-quoting Scottish butcher Davie Dowling, are still in the grip of Secretary of State Lord Arlington as unwilling intelligence agents. The pair are sent to Essex, where the plague still rages, to track down a man Arlington claims is a traitor – and bring him back alive. To ensure they carry out the mission, he sends a third man with them – a vicious murderer who Lytle had left for dead two years before and who now wants his revenge.

Harry has another problem, a growing feeling for his hitherto distant and hostile maidservant, and he knows that to refuse or fail Arlington will put her life and that of Dowling’s family at risk from the ruthless aristocrat.

Add to that the struggle for the ear of Charles II between factions at court, intrigue and treachery, religious fanaticism and bigotry, and the looming war between England and Holland over maritime power and trade and you have the setting for a relentlessly-paced adventure which splashes through the ever-present filth, squalor and decay of the mid-17th century.

Lawrence spares the reader little. The graphic descriptions of plague-hit Chelmsford and the Essex villages; the barbaric lengths to which some went to try to deny its spread; the superbly accurate portrait of Colchester, battered by the guns of Cromwellian general Fairfax, standing alone again as a bulwark against disease; and the general air of panic and helplessness make this riveting, if uncomfortable reading.

Lawrence balances this unrelenting background of woe and a searching examination of some of the darker areas of the soul with the simple and deep-rooted faith of Dowling and the native cunning, wit and ingrained morality of Lytle as the story builds to a violent climax – then saves one more twist for the end.

If you’ve read the earlier chronicles, this brilliantly descriptive book carries on the tale. If you haven’t, it’s as good a place as any to meet a likeable rogue, who’s certainly no better than he should be, but keeps trying. It's a fine piece of historical fiction – shame about the geography!