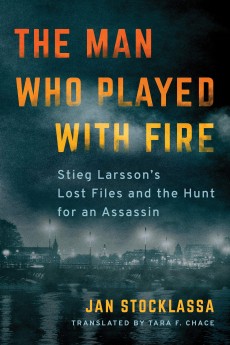 The Man Who Played With Fire

Jan Stocklassa follows Stieg Larsson’s investigation into the assassination of the Swedish prime minister Olof Palme in February 1986. The assassin has never been identified and the trail of intrigue, espionage and conspiracy covered various parts of the globe.

I think everybody is familiar with The Girl With the Dragon Tattoo, The Girl Who Played with Fire and The Girl Who Kicked the Hornet’s Nest which took the literary world by storm and shocked readers venturing into the complex dark world of psychological thrillers written by Stieg Larsson. The Swedish author of the Millennium trilogy had no idea how successful they would become – his premature death from a heart attack at the age of 50 made it impossible for him to enjoy the global popularity of the novels which have been published posthumously.

Books and articles about Larsson followed but not so many people were aware of his other interests and the real non-fictional right-wing villains he was following. Hence The Man Who Played with Fire comes at the right time as it tells a captivating story of Larsson and his pioneering work which turned into a life-defining fight against right-wing extremists and neo-Nazis.

He started as an independent researcher, illustrator and journalist focused on mapping Sweden’s extreme right-wing associations. That research was later reflected in the novels, and no wonder that his vast knowledge of recent history and social reality in the country inspired also the original title of the first book which was Män som hatar kvinnor (Men Who Hate Women).  Maybe it was too strong for the translated editions.

The Man Who Played With Fire is described and written as creative nonfiction, based on genuine facts, opinions and commentaries, but thanks to the sharp-flowing narrative style it reads like a political thriller, whodunit and a social commentary on the state of country. Jan Stocklassa, a former diplomat and businessman, writes about Larsson’s lost, or rather securely hidden, files and the hunt for an assassin.

He initially sought to produce a book on specific locations and their potential impact on people’s criminal activity. But as he started his own enquiries, he also became fascinated with the 30-year-plus unsolved mystery and gained unprecedented access to Larsson’s extensive material collected over the years following the unsolved assassination of the prime minister Olof Palme in February 1986.

It had happened on an ordinary Stockholm street while he was walking home from the cinema with his wife and was shot at point-blank range. Palme was a controversial leader, outspoken, with strong views, generally admired for his left-wing socialist domestic reforms, and hated for his criticism of apartheid, among other international issues. Larsson was a workaholic with a “life’s mission, deep-seated passion for the fight against racism and extremism, single-minded obsession with rooting out injustice and intolerance in the society.” He accumulated tonnes of detailed investigative material.

“The theories ran the gamut of possibilities and included a lone madman, groups of Swedish anti-Palme right-wing extremists or police officers, and vast international conspiracies tied to arms deals with Iran or Palme’s opposition to apartheid in South Africa,” writes Stocklassa.

The incredibly informative book provides a fascinating insight into an obsession and search for truth, and Tara F Chace’s translation does not miss a beat. Stocklassa followed the thread of Larsson’s investigation, though he thinks that a different person had been responsible for the assassination. His way of reasoning is equally interesting, and his own thorough follow-up and conclusions lead to identifying the killer. The name isn’t included in the book but has been given to the police. The case might be closed but we will not know yet.