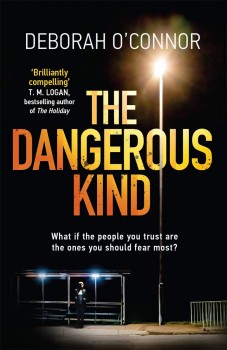 Cassie has gone missing, but her best friend Marnie is the only one who seems to care.

London today. Jessamine, a former journalist, now hosts a long-running true crime radio series, Potentially Dangerous People, at the BBC. She also volunteers at a helpline for victims of domestic violence and is a single mum to a teenage girl.

Jitesh, a straight-A student, has an unconditional offer for Cambridge University, but decides to take a year out and work as an IT intern at the BBC. His stutter alienates him from his peers and drives him to spend his lonely home life as a hacker.

London 2002. Rowena, a young girl lost in the system, is an easy target for abuse by those with a bit more age, a plausible line, a few pounds in their back pocket and a car. By the time reality bursts Rowena’s bubble of naivety, she has already lost the will to break free from the sexual grooming and exploitation her boyfriend is subjecting her to.
Three people with no connection, until the winter night Jessamine steps outside to dissipate her latest hot flush, and a young woman, Marnie, accosts her, begging her to investigate the disappearance of her best friend.

The mountain of backstory the author made me climb at the start of this novel did little to impress me. Quite the opposite; it made me certain I was going to angry-read my way to the last page. I was wrong. Though most of the backstory was irrelevant, causing the book to start at a pace that wouldn’t raise a sloth’s pulse, the intelligent plot, the quality of writing and the characters eventually burst out of their cocoon, and the story evolved into an emotive and atmospheric read.

At times, this is a disturbing book. Rochdale, Jimmy Savile, domestic violence, sexual abuse, sexual grooming, rape and youth alcoholism fill the pages; dirty topics that we would prefer didn’t exist. But O’Connor has treated these with compassion and without leaning toward the gratuitous.

The main players are realistic, not too stereotypical, but their true strengths come from their beliefs in their flawed introspections, which justify their oft-catastrophic actions.

Jessamine stands out. She’s feisty enough to break the rules and unafraid to pursue the truth, However, she is a secret keeper and typically unaware of those her daughter is keeping from her. This subplot has a hint of red herring but turns into a reasonably convincing story.

I disliked Jitesh at the start. His hacking hobby is seedy, voyeuristic, and he comes across as almost self-entitled – until his story unfolds. By the end, he had become my favourite character. Jessamine and Jitesh are sufficiently mismatched that their platonic relationship is fascinating. I would like to see these two investigate together in future novels.

Rowena is a study in desperation; a forlorn hope, a vulnerable child that social services have made invisible. Unfortunately, she is real. There are thousands of girls and boys out there who are her mirror. She is reminiscent of the recent cases of Rochdale and elsewhere; of girls being abused by groups of men. Her story highlighted that although this may be vaguely set in London, it is primarily set inside the human psyche, the most terrifying place of all for a young girl.

Part of me felt the author had jumped on a seedy bandwagon with her sex abuse topics, and I baulked for 24 hours, leaving the half-read book glowering at me from the coffee table. In the end, I relented, and I am extremely glad I did.

The dark theme makes The Dangerous Kind a difficult read. However, it is enthralling and utterly addictive if one can get past the boring backstory at the start.