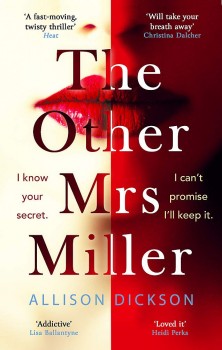 The Other Mrs Miller

The incongruous little blue Ford car is on the street again. Phoebe could almost see its presence as a game, not a danger – if it wasn’t for her father’s legacy.

Phoebe hardly leaves her gold and diamond encrusted cage any more. Her house, a relatively isolated mansion on an exclusive street in the best part of Chicago, is a luxurious prison, protecting her from the scandal surrounding her father. But it does not protect her from her own demons: drink, infertility and a failing marriage.

She can’t remember exactly when the car sliding into a parking space on the street became an almost daily event. But even though she has a sense of foreboding about the person behind the misted-up windscreen, it almost provides her with a distraction from her self-pity and wallowing. As does the Napier family who move in across the road.

But everyone on the street, welcome or otherwise, has secrets. And they are about to unravel in the most violent and hideous way.

This knotty little story is for the most part written in the third person present tense, focussing on Phoebe in the first half and Nadia in the second. From the outset, I disliked Phoebe intensely. She is ‘The Girl on the Train’ but with an even more self-entitled, woe-is-me outlook on life, and one who is rich enough to not have to take the train or work or pick up a pen if she doesn’t feel like it.

Her new BFF, Vicki Napier, does stir a few noble cells in Phoebe’s brain, but they are countered by her behaviour with Vicki’s son. I can’t say I had any sympathy for her or her self-absorbed alcohol-guzzling behaviour when I hit the half-way mark in the book, and I was in two minds whether to keep going. But curiosity and an appreciation for quality writing ruled the day. And although I will probably not remember this story in six months’ time, it did provide me with a couple of hours of pure escapism, with the odd wry smile thrown in.

The writing is above average, with a fresh observational vocabulary. It is polished without being pretentious, as if someone has taken the time to really edit the book and scratch out as many clichés as possible. Unnecessary description is mercifully scant. No, I would not know this story is set in Chicago; it could be the expensive side of the river in Anywhereville. But as much of the action takes place inside houses, it is of little consequence.

The ending slightly disappointed. I was expecting to witness a war and didn’t even see a slap on the face. It was rushed and as if the author had moved on from this almost-jewel of a plot.

That more than two suspicious deaths can go unsolved takes a small beating of the suspension of disbelief. But this book caught me in the mood for cosy noir and with a forgiving attitude. So I kicked off my shoes and thoroughly enjoyed the (not 100 per cent surprising) twists and the odd coincidence. I indulged in this fast-paced, in places farcical and darkly humorous story, and allowed myself to hate most of the characters in the book. This is definitely an author whose future books I will read.