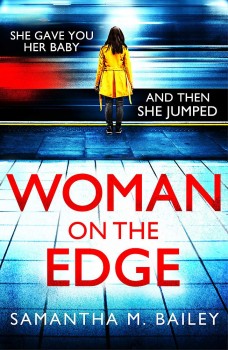 Woman on the Edge

Morgan’s life spins out of control when a stranger throws herself under a train.

Morgan doesn’t know the woman standing in front of her on the platform of Grand/State station. She doesn’t understand why the woman is begging her to take the baby. She has no idea why this stranger calls her by her name. And she really doesn’t know why in the seconds after she thrusts the baby into Morgan’s arms, the woman throws herself under an incoming train.

The police don’t understand either. But rather than seeing Morgan as an innocent and traumatised bystander, she becomes a person of interest then a possible murder suspect. That’s because she has a connection with Nicola, the dead woman, and she is just about to inherit a fortune thanks to that buried bond.

To prove her innocence, Morgan must dig for clues hidden in Nicola’s last few days and discover why the woman thought her baby was in danger. But even before she has chance to draw out the truth, Morgan realises she is in mortal danger too.

Although the author is from Toronto, the story could be set anywhere, because the only reference to milieu seems to be the Grand/State Station and a plethora of out-of-context street names.

This plot has an interesting premise, and the bones of the story are definitely strong enough for a full-blown novel. Unfortunately, the author forces the reader to suspend disbelief one too many times, which spoils the result. The major sticking point for me is that no matter how mentally ill or depressed a mother is, she would not entrust her baby to a stranger. There are also many twists that require extraordinary powers if one wants to suspend disbelief.

Character development is a little superficial and many of the major characters are stereotypes, including the slightly unreliable narrator, the scoundrel other half, suspicious friends and relatives, and main characters with secrets from the past. That’s not to mention an ending where the protagonist who has every reason to mistrust men in perpetuity, finds her soul mate and lives happily ever after without even a nod to caution.

Morgan didn’t tug at my emotions particularly, and she positively drove me towards the whiskey bottle when she declared she had feelings for the dead woman’s brother within a day of meeting him. She’s another woman portrayed as feigning independence by being proactive in uncovering the truth (for proactive read stupidly rash) but actually needy and looking for love. The main memory I have of Nicole is that she kept mentioning her chakras. These frequent references did not add to the plot or drive the story forward, just trivialised her post-partum depression. That said, though I should have felt desperately sorry for her, I did not feel a connection with this character either.

However, the author has a talent for maintaining suspense, so I kept going, despite the story leaning towards melodrama and the pages being filled with too many soap opera characters. It is a quick read, with straightforward writing that fits the genre. The whodunit aspect is unsurprising, but that comes from the fact I read so many mysteries.

This is a debut novel, and one that shows a promising author behind the pages. Rein in the melodrama and implausible twists. Put meat on the bones with deeper character development. Steer away from the obvious/stereotyped, and future stories from Samantha Bailey will definitely be on the to-read list for me.