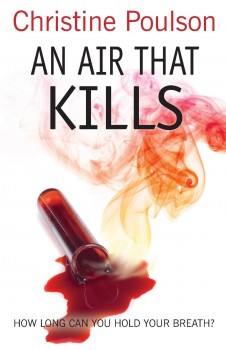 An Air That Kills

A rich sponsor is suspicious that there are problems in a high-security virus research institute. A skilled scientist is sent to investigate undercover and gets embroiled in a much more serious turn of events, events that could result in a pandemic.

After almost a year working in the perpetual darkness of an Antarctic winter, Katie is struggling to find a new routine and also a new position that befits her experience as a medical graduate and experienced science researcher.

She is contacted by an old friend who sponsors a high-security institute, off the coast of Devon, where category 4 research is being carried out on how viruses can cross the species boundary to humans, particularly a form of malaria. Her friend is suspicious that there is too high a turnaround of technicians and asks her if she will masquerade as a lab technician and use her skills to investigate what is going on.

As the reader, one is privileged to know the fact that there has been some clandestine actions at the institute involving mosquitoes which have been infected with a very serious and highly lethal form of malaria but we do not know who has been doing this. The reader is also made aware of a very serious plague-like infection that has taken place in a closed locality in western Africa.

With the scene thus set, the plot is not complicated but is handled in a very competent way. Katie, who has a love interest which arose in Antarctica, arrives at the isolated island with a new identity. She gets to know the main protagonists of the plot. These are a diverse group of people, well described with enough questions unanswered for any of them to be the villain of the piece.

Katie uncovers many anomalies in the work at the institute, and as her opinion of people develops, the plot thickens. The story is atmospheric with strong, believable descriptions of place and motivation. The ending is satisfying and ties up the loose ends neatly.

This is a very easy read, not challenging and thoroughly enjoyable. I read it in two short sittings and would recommend it as untaxing and relaxing way to spend a few hours.