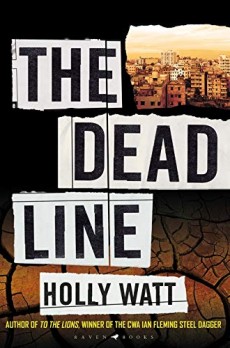 Journalist Casey Benedict, alerted to the possibility of a horrific trade in babies, embarks on a dangerous investigation.

Holly Watt’s superb, brutal but compassionate globetrotting story To The Lions was one of the best crime debuts of last year, rewarded with the CWA Ian Fleming Steel Dagger and a shortlisting for the Wilbur Smith Adventure Writing award.

This follow-up is equally as horrific, exploring the depths to which criminals will exploit basic human desires – and is so frighteningly plausible that Guardian investigative journalist Watt may just as well have been writing a front-page lead for her paper!

She never shies away from difficult subjects – and the desire of many infertile Western couples for children and the whole surrogacy business is probably the most emotive of all. It allows her to display her very real anger at the lengths to which unscrupulous men and women will go to exploit this and their often-wilful ignorance of their ‘victims’ who are desperate for a child of their own

And it also allows her to express her compassion – some of the scenes involving those so willingly exploited, let alone the innocent girls, kidnapped and forced to become breeding animals to further this filthy trade, will reduce even the hardest-hearted to the brink of tears.

Once again, Watt manages to make the reader question the value of human life and consider what it means to be human with some beautifully written and quite tragic descriptions. Investigative journalist Casey Benedict is used to stories that take her from the bottom to the top of society – stories with a huge human cost.

And the latest case for the all-female Post team is no different. Alerted by a desperate message: ‘They take the girls’ stitched into clothing manufactured in the sweatshops of Bangladesh for the British high street, she and her team know they could be on the brink of a major exposé. But while identifying the factories in which the clothes are made is a relatively simple challenge, following the trail of those taken is quite another, difficult and dangerous.
Their attempts to find the missing girls take them from their comfortable London newsroom to the backstreets of Dhaka and Chittagong – and into the very hearts of families whose lives will be destroyed if what they uncover is revealed. Involved along the way are a respected Harley Street doctor specialising in IVF treatments, British embassy staff and an international collection of brutal crooks and enforcers.

Benedict is a determined, physically brave, frequently spikey, character who finds it difficult to remain detached from events and more than once is forced to question and reassess her own motivation. In this she is aided by ex-Marine captain Ed with whom she had worked during a story on piracy in the Horn of Africa who she persuades to become her bodyguard and for whom she develops an increasing feeling.

This emotional rollercoaster of a book is brilliantly researched and packed with insider-knowledge. The largely accurate newsroom scenes, filled with the rivalry, comedy and friendship that are the very stuff of journalism, are a background to a pulsating, globetrotting thriller which explores the darkest corners of humanity and offers a strong message and a compassionate heart that will grab and hold your attention from the very first page.

My only quibble is the make-up and apparently limitless budget of the Post’s investigative department. In more than 30 years in the business I never came across an all-female team and the furthest my employers would pay for me to explore a story was Jersey, Armagh or Amsterdam. Put this totally unjustified criticism of a quite brilliant story down to the jealousy of a disgruntled old man!