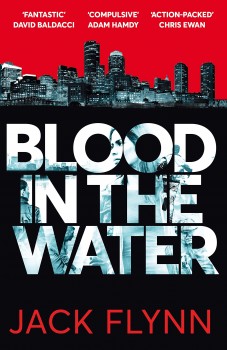 Blood in the Water

Gang war erupts on the Boston waterfront and Diamond, daughter of union boss Cormack McConnell, is caught in the middle.

Boston lawyer Jack Flynn, whose pro-bono work has brought him into contact with the horrifying facts and the massive corruption surrounding organised crime in the US, has used this knowledge to produce a hard, gritty and unrelenting story of ambition, betrayal, bloody torture, violence and murder on his home city’s waterfront.

Harbour Union chief, Cormack McConnell, a typical Boston Irish longshoreman, has lived his life close to the wire. A more benevolent version of the infamous Teamster leader Jimmy Hoffa, he controls everything – and takes a cut from everything that happens on the waterfront.

Someone wants him out of the way and after narrowly surviving a brutal attack on his bar, Cormack believes he’s been betrayed by one of his crew – Buddy Cavanaugh, but is shocked to discover the young man is the lover of his precious wild child 19-year-old daughter, Diamond.

Meanwhile Special Agent Kit Steel, with whom McConnell shares both a business and personal relationship, is committed to see obsessive Salvadoran killer Vincente Carpio, responsible for the murders of her husband and son, face justice. He has already managed one escape and Kit is determined to ensure he does not do so again. His brother Javier has other ideas and combines with an Asian underboss of the deadly MS13 gang – regarded as the most dangerous in America, whose influence has spread throughout continental United States, Canada, Mexico, and Central America. Most of its heavily tattooed members are Salvadorans.

Mara Salvatrucha, which grew from the Salvadoran peasants trained to become guerrilla fighters – the so-called Farabundo Martí National Liberation Front – in the civil war of the 1970s and 80s, is now an international criminal gang with its main base in Los Angeles and defined by its ruthlessness and cruelty.

T’phong Soh has plans of his own and intends to use the Carpio brothers to help overthrow the MS13 leadership and seize controls of all drugs shipments to the US. He and Javier hatch a daring, but inevitably massively violent, plan to free Vincente, but McConnell, who has control of all shipping movements and dockside, activities stands in their way.

This dark story, with touches reminiscent of Grisham and Connelly and with a cast of complex and conflicted characters, is suitably set against one of the coldest winters in Boston history. Flynn also offers a fine portrayal of what the city was and what it is becoming through the changing geography of the waterfront as development and gentrification destroys much of its historic ‘charm’.

All this builds to a predictably explosive finale – probably the weakest part of what otherwise is a very well worked and intelligent thriller. With the amounts of money at stake in the Soh-Carpio venture, I suppose anything is possible!