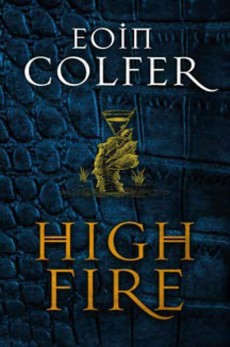 A teenager, a dragon and a crooked cop. Life in the Louisiana swamp will never be the same for Squib Moreau when he meets Vern, the last dragon.

Eoin Colfer, author of the Artemis Fowl teen thrillers, turns his hand to adult fiction with High Fire, set deep in the Louisiana swamps, filled with alligators, criminals, crooked law enforcers and even a dragon. Yes, that’s right, a real live dragon called Vern, short for Wyvern, known to his only living friend as Lord High Fire, the last dragon. And Vern didn’t get to his ripe old age of several millennia by trusting humans, who – in his experience – have a nasty tendency to break out the flaming torches and pitchforks at the first mention of a dragon in the vicinity.

So Vern has stayed out of the way, holed up in the Honey Island Swamp, carefully cultivating local superstitions about a monster living deep in the bayou to make sure that he’s not disturbed in his shack on the island. But disturbance is heading Vern’s way in the person of local swamp-rat, 15-year-old Squib Moreau, who lives at home with his mother Elodie and ekes out a living running errands and working three jobs just to make ends meet.

Squib is concerned that his exhausted mother is going to succumb to the attentions of bent cop Constable Regence Hooke, so he works as much as he can to bring in some extra money to keep his mother out of Hooke’s clutches. Setting crawfish traps is one of Squib’s sidelines and it’s during one of those forays into the swamp that he overhears a conversation between Hooke and local purveyor of all things legal and illegal, Willard Carnahan, and then witnesses Carnahan’s brutal murder.

With Hooke hot on his tail, Squib thinks he’s seen his beloved momma for the last time, but his terror at being hunted is nothing like the jolt of fear he gets when he’s abruptly flipped out of the frying pan into the fire and finds himself facing a seven-foot tall reptile wearing a Flashdance teeshirt and a pair of cargo pants. That’s not exactly normal, even by swamp standards.

Much against his better judgment, Vern doesn’t immediately kill the boy and, even more against his better judgment, he agrees to an arrangement whereby Squib takes on the job of running errands for the enigmatic Waxman, who probably classes as Vern’s only living friend. Squib thinks he’s gone up in the world, but Hooke is still a danger. The relationship between Squib and Vern is complicated, but gradually, the two drift towards something that, to an outside observer, looks very much like friendship, even if Vern would be the first to deny it, as he knows that friendships with human always end in trouble.

With all the casual flair he demonstrated in his teen series, Colfer deftly serves up an adult thriller where laughter makes an at times uneasy bedfellow with horror, with that horror coming from the actions of the unprincipled Regence Hooke, who has no problem disposing of anyone who’s likely to stand in his way. The fact that one of the main characters is a dragon is almost incidental to the action, which is a testament to Colfer’s skill in normalising the distinctly abnormal, as he pits a fire-breathing dragon against a bent cop.

High Fire is an excellent foray into the world of adult crime fantasy. Vern and Squib are both characters well worth getting to know, and the final conflict with the deeply unpleasant Hooke has all the same relentless qualities as the Terminator movies, making it impossible to look away, even though I was hiding behind the sofa cushions at times.