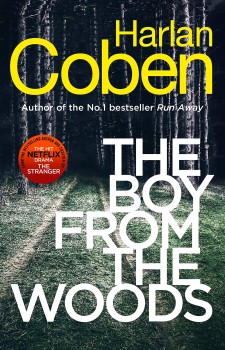 The Boy From the Woods

When a girl from her grandson’s school disappears, New York lawyer Hester Crimstein agrees to his pleas to make some enquiries. Then there’s a second disappearance, with possible political undertones.

Naomi suffers from bullying at school. The teachers seem oblivious to what she’s put through by others in her class, day after day – either that or they’re too weak to tackle the problem. Matthew knows what’s happening to her, but he doesn’t feel able to side with Naomi against the rest of their class. He does care, he just doesn’t know what to do to help.

Then Naomi disappears, and Matthew does the only thing he can think of and goes to see his grandmother, who happens to be well-known New York lawyer, the formidable Hester Crimstein. Finding her grandson in the audience of a live TV show she’s appearing on is enough to surprise even the unflappable Hester, but not enough to knock her off her stride. Matthew is worried and feeling guilty that he did nothing to help Naomi, so Hester agrees to go home with him and make some enquiries, even though Matthew makes her promise she won’t tell his mother, Hester’s daughter-in-law.

Going back to the heart of New Jersey isn’t easy for Hester, even though it’s only 30 miles from Manhattan. The Ramapo Mountains, part of the Appalachians, were the scene of the fatal accident that claimed the life of her son and she can’t help the memories coming flooding back. But she’s as good as her word and goes to see Naomi’s father, who claims his daughter has gone to visit her mother.

Hester isn’t convinced and involves a friend of her son’s. Wilde is something of a local celebrity, as 30 years ago, he was found in the woods, wearing ragged clothes, with no idea how he’d got there or how long he’d been living a feral existence, camped in the woods and obtaining food from bins and by breaking into houses.

The Boy From the Woods has all the hallmarks of vintage Harlan Coben, involving one of the many characters that provide internals links in so many of his books. Hester Crimstein will be no stranger to anyone who has followed the books for some time, whilst at the same time this story is perfectly self-contained as a standalone for someone discovering Coben for the first time.

Hester Crimstein is a formidable opponent, as anyone who has faced her in a police station or in a courtroom will know and it was great fun to see her as a main character for once. She is in her 70s now and is the absolute epitome of a kick-ass older woman who is at the height of her professional prowess. It’s also nice for once to see her more vulnerable side as she struggles with the memories of her son’s death, while taking some very tentative steps forward in her personal life as she meets local police chief Oren Carmichael again.

Wilde, the titular boy from the woods, is another strong character. He’s an ex-soldier who prefers to live alone in the woods, in an eco-home capable of being moved from place to place as Wilde has no intention of putting down roots.

The search for Naomi is very quickly complicated when another teenager goes missing, and it’s thought the two might be together.

As I’ve come to expect with Coben, nothing is ever straightforward and this is anything but a standard tale of missing kids of the sort that seems to have flooded the genre at the moment. Instead, throw in a dash of high-level politics, then add some serious money to the mix, stir in a few dark secrets, season well with suspicion then give the pot a vigorous stir. It’s a good recipe, and it’s one that Coben has been working to for years with a great deal of success. I’ve followed the books for a long time now, and I don’t find the formula repetitive, as he invariably employs an interesting cast of characters and introduces enough twists and turns to prevent a descent into predictability.