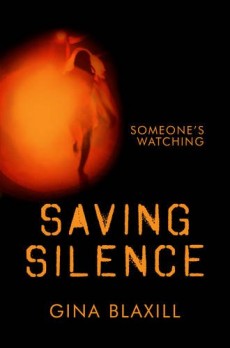 When Imogen saves Sam from a hit and run, her problems are only just starting. She has information someone wants and they’re quite willing to resort to violence to get it off her.

Sam Costello isn’t the sort of boy who’s easy to get to know. He’s aloof, definitely a bit of a loner and constantly rebuffs any overtures of friendship, so when he tells Imogen that he needs to talk to her on her own, it certainly comes as a surprise. But the even more surprising thing is that before he gets a chance to say anything, Imogen manages to push him out of the way of a speeding car and save his life.

They’re both convinced it was a deliberate attempt to kill Sam, even if no one else seems to have the same conviction. Then Imogen starts received threatening messages, demanding that she hands over her phone, and some local hard cases are determined to back up the threats. Sam’s secret is now threatening her life and that of Benno, the younger brother she adores.

Gina Blaxhill paints a believable picture of teenagers wrapped up in a problem that’s way over their heads. The story is told in alternating points of view by both Imogen and Sam, and Blaxhill does a good job of ensuring that they remain separate narrators, each with their own distinctive voice. Imogen is popular, savvy and tough. Sam’s bright but lonely, forced to live with his father and his new wife following the death of Sam’s mother. He doesn’t feel like he fits in, either at home or at school.

A host of minor characters populate the pages of Saving Silence, and Blaxhill has an enviable ability to bring them to life with vivid pen portraits, from Imogen’s friend Nadina, injured in a brutal attack on her parents’ flat, to Ollie, Imogen’s sort-of boyfriend. They’re real, they matter and it’s easy to care about them. Like Imogen, I very much wanted to know what secret she was supposed to be carrying, and I felt her helplessness when she was pitted against Josh and Dale McAlistair, two teenage thugs quite capable of terrorising an entire estate and getting away with it.

There’s some very good young adult fiction around at the moment and Saving Silences falls fairly and squarely into that category. Blaxhill’s two narrators come across as real teenagers facing real pressures. The romance angle is very under-played and never intrudes on the story.

Going off at a tangent here, I’ll now admit to spending over half the book worrying about Sam’s dog, an old greyhound called Jessie. It’s at times like that I really wish there was a book equivalent of http://www.doesthedogdie.com/www.doesthedogdie.com. It would save me a lot of anxious flipping to the back of the books in an attempt to find out! If you want to know the answer to that before you read the book, by all means contact me!