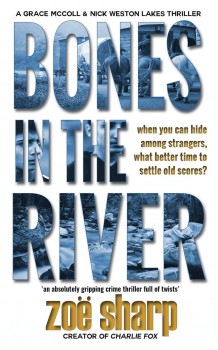 Bones in the River

DC Nick Weston and CSI Grace McColl have to investigate a hit and run and the discovery of the bones of a man in a makeshift grave uncovered by the river Eden against the backdrop of the annual Appleby Fair.

Every year, the Cumbrian village of Appleby-in-Westmoreland plays host to the annual gathering of the Gypsy and Traveller community. This is an event not without controversy and there is something of an uneasy relationship between locals and the fairgoers. This year tensions are running high for more dramatic reasons than usual.

Members of the travelling community are being questioned by the police over the disappearance of a local boy and the discovery of his damaged bike in a skip, with forensic evidence that links back to one of the Gypsies. Vano Smith claims he found the bike by the side of the road but wasn’t involved in any hit and run.

Then matters worsen when a body is discovered in a makeshift grave partly collapsed into the river near the spot where the Gypsies bring their horses to be washed. Inevitably, suspicion falls on the Gypsy and Traveller community. The police are keen not to inflame local tensions, but that’s a big ask when the body of the missing boy is found in the river and is believed to be the victim of a hit and run.

DC Nick Weston and Crime Scene Investigator Grace McColl are required to navigate the tensions riding high in Appleby as well as the inevitable internal stresses of both investigations. Grace’s boss, head CSI Chris Blenkinship, isn’t exactly her biggest fan and on this occasion, he’s dismayed to find that she’s picked up the hit and run case.

Grace is a dogged investigator with considerable flair and ingenuity when it comes to an examination of the evidence and is the force’s most skilled forensic specialist. And Blenkinship has good reason for his concern. It became clear very quickly that he was the person responsible for the boy’s death when driving homes from a dinner party, over the legal limit for drinking and driving. A moment’s inattention was all that it took. Not wanting to jeopardise his career, Blenkinship took the decision to conceal the accident, a decision that will inevitably come back to haunt him, especially with Grace’s involvement.

This is the second outing for Weston and McColl and it’s every bit as good as their introduction in Dancing on the Grave. When I finished their debut I had hopes of this becoming a series and those hopes have been amply fulfilled. Appleby, with its influx of caravans, horses and traders, provides an atmospheric backdrop for another ably executed police thriller that positively oozes a sense of place, making it easy to picture the rolling hills and river valleys, the colourful caravans and their occupants. Zoe Sharp writes well and sympathetically of both townsfolk and incomers, with rights and wrongs on both sides.

As ever, there are surprises in store in the forensics, and Sharp pitches a good mix of plot-driven action and character development, with bags of tension on all sides. Every time I thought I’d got a handle on what had happened, a brisk wind blew across the fells, dispelling my theories and leaving me floundering. The final twist was one I didn’t see coming.

The only thing that came close to bouncing me out of the story was the introduction of the shrewd pathologist, Dr Ayo Onatade. Using the name of such a well-known figure in the world of crime fiction drove a horse and cart at speed through the fourth wall, although I did enjoy the mental images of my friend dealing briskly with all comers and dominating every scene in which she appeared with a force of personality and style that went further than appending her name to a fictional character. If anyone is capable of fighting crime with style, it’s Ayo!

Bones in the River is intelligent and cleverly written, with well-drawn characters and a plot that twists and turns like a true Cumbrian road.