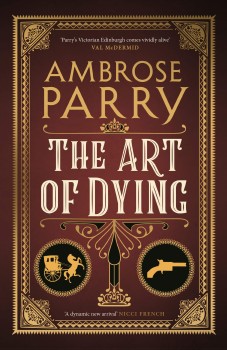 The Art of Dying

Will Raven returns to Edinburgh a fully qualified doctor to find he must resolve his feelings for former housemaid Sarah Fisher as the pair plunge into the dark world of a serial killer.

The second story in this excellent and intelligent historical series – the result of a literary marriage between Tartan Noir writer Chris Brookmyre and his consultant anaesthetist wife Marisa Haetzman – absolutely confirms the promise shown by their debut The Way of All Flesh.

The stories have their genesis in Haetzman’s research into the history of medicine focussing on the development of the use of anaesthetics in the late 1840s. At that time, Edinburgh was considered the centre of the medical world. It was also a city of contrast with the crime and poverty of the Old Town contrasting sharply with the grand Victorian households of the New.

Among its greatest practitioners was Doctor James Young Simpson, professor of midwifery, who not only introduced anaesthetics into the then frequently hazardous business of childbirth, but also opened his home for a series of clinics which not only treated the city’s wealthy women, but also its poorest.

It is against this background – and the revolutionary discovery of chloroform – that Brookmyre and Haetzman set another dark and stylish mystery underpinned by historical fact and research which looks at both sides of the medical world, the humanitarian and altruistic.

Dark and visceral, gritty and charming, with a twisting plot and compelling characters – not least, the Victorian Edinburgh – the immersive world the authors portray is totally convincing. The story’s strength is its central characters and their relationship. At its heart are Simpson’s former apprentice, the quick-tempered, surly and secretive Raven and the determined, inquiring and intelligent proto-feminist one-time housemaid Sarah Fisher. Both are drawn with real empathy and nuance, and their complicated feelings for each other drive the book as much as the clever storylines.

Raven, still snobbish and narcissistic, but now qualified as a specialist in obstetrics, returns to Edinburgh in 1849 from a tour of European medical schools – interrupted by a deadly attack in Berlin which forces him to kill a man – to assume a position of assistant obstetrician at Simpson’s house.

He is dismayed to discover that Sarah, for whom he had suppressed his earlier romantic feelings because of her lowly status and its possible affect on his own career, is now married to another doctor and is working as Simpson’s nurse. She still dreams of a career in medicine, but the Victorian establishment, nowhere more evident than in staid Edinburgh society, makes this impossible.

When jealous competitors spread rumours about Simpson’s role in the death of a female patient, Sarah is determined to refute the unfounded allegations and enlists the help of the initially reluctant Raven. What neither can know is that a serial killer, who murders solely for warped gratification, is actually responsible – and also for a long string of other deaths across the city.

The story is told in a mixture of traditional third-person past, and the first-person monologue viewpoint of the killer, a technique which works well as the reader gradually discovers the events which created this cold-blooded monster. Although there is no secret as to the killer’s identity, the co-authors’ skill with misdirection makes the final dénouement no less exciting or unexpected.

Characters from the first book return, including the vicious and criminal money lender Flint and his gang and also the deeply unpleasant and corrupt Inspector McLevy. Some are fleshed out much more in this story, particularly the man-mountain ‘muscle’ Gargantua. There is also an interesting sidebar on how innovation is a source of inspiration to criminals – chloroform renders people unconscious, so it is no surprise enterprising crooks decide to try to employ it during a robbery.

Skilful character development of Raven and Sarah, both of whom face huge challenges, not least with major shifts in the way they think – Sarah as she begins to envisage a future she never could have entertained and he beginning to understand he must accept all that he is – provide an entertaining sub-plot to what is an impressively researched piece of period work with rich authentic detail and real-life characters.

For Britons who have only ever known the NHS, this is a sobering illustration of the reality for many in the rest of the world. This is no worthy morality tale – just a masterfully written, highly enjoyable crime thriller, a believable fact-based plot based on superb research with plenty of extra thrills and chills.