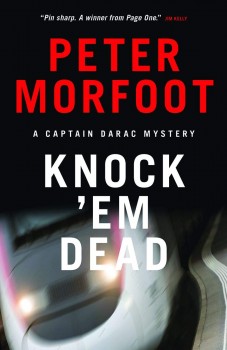 Captain Paul Darac is called to the suspicious death of a former comedy star and enters a world of chicanery, corruption and murder.

For more than 30 years, art historian, satirical writer and jazz buff Peter Morfoot has explored the life, the art – along with the restaurant tables and bars – of the French Riviera. The result has been a series of ‘franglais’ crime novels which perfectly captures life both in Nice, towns such as Cagnes-sur-Mer and Vence and the villages of St Laurent du Var, Saint Jeannet or Colle sur Loup which surround the millionaires’ playground and the spectacularly beautiful  Baie des Anges.

His three novels so far have provided a very different – and uniquely French – approach to the definition of a procedural, the business of detection and life in general which makes for fascinating reading. His hero is Captain Paul Darac of the Brigade Criminelle – the major crimes division of the French police – based in Nice. As the son of a famous ‘Nose’ in the perfume industry, he has his own sometimes haphazard abilities to sniff out crime.

But he has also assembled an engaging and distinctive team of detectives second to none – each with a particular skill, including the ability to find the most outlandish sweets in a country which takes its confectionary seriously – which allows them to operate much in their own way, largely ignoring the petty interventions of a publicity-seeking Public Prosecutor and changes in the law restricting what was normal practice for French police emanating from the European Court of Justice.

The team is called to a suspicious fatality at Saint-Laurent railway station. The victim appears to be a former comedy film star, once the darling of France as Monsieur La Chute, known for his artistic pratfalls. But La Chute, real name Ambroise Paillaud, is of interest to others for entirely another reason. A rich man, he has vowed to leave his fortune to the small commune of La Crague du Var, where the venal, grasping mayor is counting on it to cover holes in the public finances and his brutal, bullying brother-in-law also expects to get his share.

One problem is that Paillaud was in the habit of regularly changing his will – and had met with a notaire publique minutes before his death. When the notaire is murdered before she can file what everyone supposes to be a new will, the picture changes. When the Public Prosecutor turns the death into an international news story, Darac must draw on every resource at his disposal to unravel a knot of chicanery and corruption.

The procedural side – sharply depicted crime scenes and plenty of detail – make this a real winner from the off. But it is Morfoot’s fluent storytelling – and his very French habit of running several unconnected personal stories alongside the main theme – which engages and holds the interest as the twists and turns of a complex case are unravelled.
In the obligatory French mix of relationships, infidelity and corruption and we get to know about Lieutenant Roland Granot’s weight and cholesterol problems which threaten his frontline career after 25 years in the Brigade Criminelle; Darac’s on-off love affair with Frankie Lejeaune, Captain of the vice squad; and above all his involvement with the Didier Musso Quintet and the Riviera’s lively and ever-popular jazz scene.

All these apparent sidebars, a blend of great characters, a fun location, a tight plot and dirty politics on both sides of the law, make Darac’s continuing adventures one of the best crime series I have read in many years. Keeping a continuing character interesting is never an easy task, but Morfoot achieves it with both flair and imagination.