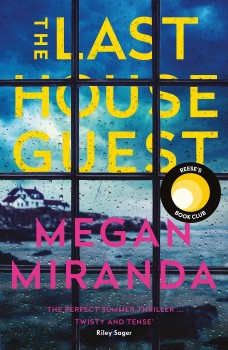 A year ago Sadie’s death was said to be suicide. But Avery knows it won’t be long before they accuse her of her friend’s murder.

Littleport, Maine, is a stage, a town of two halves. It breathes softly out of season, but during the summer months it is the trickster, luring the tourists in with its seaside charm.
It’s 2017 and Avery Greer has always lived in the resort town. As a little girl, she lived with her parents, but after they were killed in a car accident, she moved in with her grandmother. Now she is the caretaker of a clutch of summer holiday cottages. It is she who checks the rentals and deals with the occasional glitch and irate client for the owners, Grant and Bianca Loman.
But she is more than their employee. They bought her grandmother’s house when the old woman passed away, they held out their hand to Avery, and put their faith in her talents when everyone else watched her falling off the rails. And their daughter Sadie has been Avery’s best friend for ten years.
Although they have had words, Avery still expects Sadie to turn up for the last party of the season. But her texts go unanswered, and Sadie never shows. The police find Sadie’s body at the bottom of the cliff. Her strappy sandals were set to the side above. From the note she left, it looks to be suicide.

A year on, as the anniversary of Sadie's death approaches, Avery becomes increasingly convinced her friend didn’t commit suicide. Sadie would never take her own life. Armed with few clues, Avery digs in the dark corners of Littleport for answers. But her search may turn up more than she bargained for on those dreamy beaches.

Megan Miranda’s debut book, All the Missing Girls, used a reverse-chronology technique that proved to be anything but gimmicky. She has moved on from that intriguing formula and there are many points that make this book zing. The author has a wonderful way of creating atmosphere, using a backdrop oozing with superficial beauty, but one that has an underpinning of darkness and danger. She nudges and teases foreshadowing into her writing with talent and discretion. She flaws her characters with recognisable, if slightly generic, failings. She creates a healthy pace and keeps it going, throwing in twists and surprises along the way. Her first-person point of view allows the reader to walk by the protagonist’s side, and her writing style makes for an easy read.
Though not a world-beater, this story held my attention and kept me turning pages to the end. Miranda has earned her place on my bookshelves, and I am keeping a place for her next book.