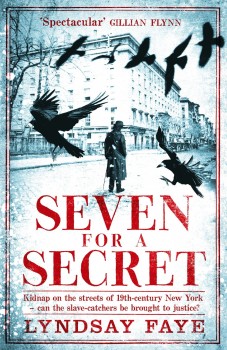 Seven for a Secret

Timothy Wilde is a copper star in the newly-formed NYPD, and is dragged into the world of the blackbirders, semi-legal slave catchers, when a beautiful black woman reports her free family has been kidnapped.

Historical novels are a problem. Do you stick rigidly to the often unpleasant truth about the times or sanitise it for modern readership? Lindsay Faye has clearly made up her mind and this second adventure in the Timothy Wilde series seems to have been written with 21st century sensibilities in mind and largely ignores the cultural mores of its setting in the antebellum New York of 1846. Unfortunately, that decision detracts from what should be a truly epic tale of murder, kidnap, slavery and corruption in a city at the time the world’s melting pot and staggering under the influx of the latest wave of arrivals fleeing the Irish potato famine.

Wilde, a ‘copper star’ with the newly-formed New York Police Department whose crime-solving skills have seen him become one of its first detectives, is an engaging and affable character, often baffled and unsure in both his working and private lives, but achieving results as much by his unwillingness to give up and strong moral convictions as by ability. But he is hardly believable as a boy from a deprived background with artistic and literary leanings trying to do his best in what was then America’s capital of crime. He takes on every crime and vice known to man, from child exploitation to kidnap and slavery, with the zeal of a politically correct social worker. Far more convincing is his elder brother Valentine, a police captain, who enthusiastically embraces many while still maintain a sense of equilibrium.

Timothy is on the trail of a gang of ‘blackbirders’ – thugs employed to catch runaway slaves and return them South – who have kidnapped the free family of a beautiful black woman to sell into slavery. The chase leads him through the city’s streets and alleys, grimy tenements, drinking dens and brothels and deals not only with the abomination of slavery, but also the exploitation of immigrants by business, corrupt policemen and the self-serving and greedy politicians of Tammany Hall. The atmosphere is enhanced by the use of ‘flash’, a sort of thieves’ cant, much of which has now passed into common usage – and there’s a useful dictionary.

The real power of the story – the obscenity of slavery – is highlighted by contemporary quotations at the beginning of each chapter on either side of the issue, or by slaves themselves. These, and Faye’s descriptions of the inhuman treatment of blacks, leave nothing to the imagination, but some of the impact is lost because of her unwillingness to face unpleasant historical facts. For example, ‘nigger’ – in common usage in the period and I imagine hardly unknown to ‘blackbirders’ – does not make an appearance for more than 200 pages, and then it’s used about Wilde who is branded a ‘nigger lover’. Earlier references to ‘people of color’ reflect modern American correctness which English readers may find a touch too coy.

In places the plot sags a little as the storyteller, Wilde, is sidetracked by personal issues and his ongoing love-hate relationship with Valentine, but several of the characters from earlier adventures return, including the beautiful, enigmatic and deadly villainess Silkie Marsh. New faces, such as the disparate members of the Vigilance Committee of the Abolitionist movement, the blind grandmother who organises the Underground Railway for escaped slaves to Canada, and a six-year-old chimney sweep with artistic longings, make an appearance. Together they add up to a good, at times gripping, read. But if Faye had been a little bolder and a little less sensitive, it could have been a great one.