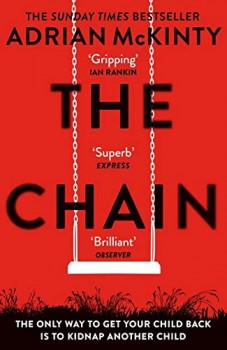 At first sight The Chain is a formulaic one-idea story. A phone call out of the blue tells you that your child has been kidnapped. You must pay a ransom but, here's the surprise, you must also kidnap another child and hold them captive. Your own child won't be released until the next family pay their ransom and then kidnap another child. This is how The Chain works, all masterminded by an evil gang getting richer by the day. So far so silly …

But the nightmare seems to be over for the heroine, Rachel, halfway through the book. She has done as she was told; her child has been restored to her and she has given back the child she was forced to kidnap, unharmed. So what now? The plot becomes more interesting when the psychological scars don't heal and trying to track down The Chain seems like a better option than letting things lie.

Rachel is a divorcee, recovering from breast cancer and living with her 12-year-old daughter, Kylie, in the Boston area. When Kylie is forced into a car at gunpoint by two brutal masked strangers it is immediately apparent that we are in Boston, Massachusetts and not Boston, Lincolnshire and this story has the potential to be a violent gun-fest. It would be easy to dismiss the storyline as preposterous, but this is 21st century America and for this reader it just seemed possible.

And Rachel is a sympathetic heroine; strong-minded but at the same time weakened by her cancer treatment. She will do anything to rescue Kylie from her kidnappers, even kill, but she is tormented by the knowledge that The Chain have created, in her, a monster. She is also a post-grad philosophy student who, rather annoyingly, peppers her narrative with quotes from the great philosophers. But I can forgive this as she and Kylie are feisty and resourceful female characters – Kylie even comes close to escaping from her captivity until she is slapped into submission.

Rachel enlists the help of her brother-in-law, Pete, an ex-marine with his own impressive collection of firearms, and we have the first inkling that they might, eventually, take on the bad guys. When Kylie is restored to her own bedroom and Pete installed in Rachel's I wondered where the story is taking us. But now the author begins to reveal the background of the perpetrators known as The Chain. Are they psychopaths or just plain ruthless criminals?

At the same time Rachel and Pete decide that they are fed-up with being screwed-up victims (Kylie wets the bed every night) and that they can only live meaningful lives if they go on the offensive. This involves a command of weaponry and a technical know-how well beyond the understanding of this reader. But detailed talk of burner phones, Wickr, Faraday cages and hunter-killer algorithms didn't detract from my enjoyment.

Towards the end there is a turn of events involving Marty (Rachel's ex-husband and Pete's brother) which feels a little contrived. But despite all the gismos and hardware this book is, at heart, a well-written, old-fashioned page turner with an ending that doesn't disappoint.