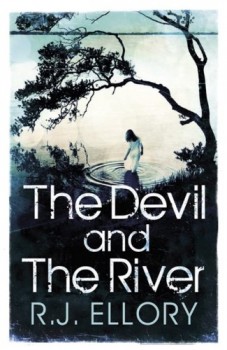 The Devil and The River

When John Gaines is called to the discovery of a girl’s body on the riverside of the small Mississippi town of which he is sheriff, he stumbles into a nightmare of murder, violence, corruption and superstition.

The disturbing The Devil and The River is as much a psychological study of mental disorder in its various forms, a harrowing expose of America’s deep south in the early 1970s and a savage condemnation of the brutal and bloody Vietnam war as it is a crime story.

Sheriff John Gaines is a Vietnam veteran, deeply psychologically scarred by his experiences in that barbaric and bloody war. He believes he has seen every one of Dante’s Nine Circles of Hell and questions both man’s inhumanity to his fellows and even the existence of a cruel and uncaring God. But when he is called to the discovery of a girl’s body on a muddy riverbank, he is plunged into yet another maelstrom of violence, madness and death. The body, that of a beautiful 16-year-old who disappeared 20 years before, has been perfectly preserved by some freak of nature – and bears horrific mutilations that suggest she may have been a victim of some form of voodoo magic.

None of her close group of friends who were with her the night she disappeared is willing to talk, and as Gaines digs deeper into the often dark and sordid secrets of the town a new series of violent deaths forces him to confront both a real manifestation of evil – and also the demons of war which have left him on the edge of an abyss.

Ellory’s convincing depiction of the corruption, racism and casual violence of the rural south of the final months of the Nixon presidency, where the Ku Klux Klan still exercised real power and old and powerful families continued to dominate all aspects of life as they had since before the civil war, is matched only by his graphic understanding of what we now call post-traumatic stress disorder. His plot is both gripping and horrific and his characterisations strong and and believable. The juxtaposition of Gaines, with his doubts he will ever return to any kind of normalcy, with the dead girl’s boyfriend, a survivor of the terrible World War Two battles of Guadalcanal but tipped over the edge into madness by her death, is chilling in the extreme.

Beautifully written and skilfully crafted, with real elegance and understanding, this complex examination of the human psyche follows a tortuous path, where nothing is what it seems and no-one can be trusted, towards a shocking ending. Long, dense, and at times almost macabre, this accomplished and darkly powerful novel will leave you shaken – but unable to put it down.