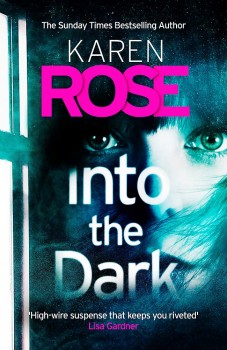 A young abused boy tries to save his young brother from his stepfather whom he subsequently sees murdered. As a witness he then becomes a target.

A teenage boy, Michael, is living with his mother, brother and stepfather, and comes across this abusive stepfather drugging the younger brother, Joshua, whilst the mother is out. He manages to rescue him and runs off with him, asleep in his arms, hiding in some woods until it is safe to get away. Whilst hiding, he sees the stepfather murdered by another man. So, he returns home.

Eventually Michael, who is deaf, and Joshua are taken by Diesel, who coaches Joshua at football, to a clinic run by Dr Dani Novak. Diesel has liked Dani for many years but she has maintained her distance. Dani and Diesel are both members of a very big group of family and friends, many of whom are FBI agents or police. Dani, who is also partially deaf, is an emergency foster carer and eventually the boys go to stay with her on a temporary basis.

Menwhile Michael has become a target of the man who killed his stepfather, who is killing off anyone who he thinks might have seen him dumping the stepfather’s and several other bodies in a river.

Diesel is a computer hacker and he and Dani begin to unravel the web of criminal activity associated with the killer. Eventually the whole family, including all the dogs, get involved in protecting Michael and Joshua.

In introducing the book, the author has included a section about Waardenburg Syndrome, a genetic condition affecting hearing and pigmentation. This condition affects Dani and her two brothers.  Also included in the introduction is a section about signing and communication with deaf people in general, a subject close to the author’s heart. The story itself includes more than one deaf person and the reader is constantly made aware of how these people communicate and how others ensure that they are treated as equals in every way. In this sense the book is a very useful educational tool.

This is a long book of 527 pages but maintains the attention of the reader throughout. It is really compelling. One reason for the length is that Dani’s group of friends and family is so big and the style of the book is to record all their on-going relationships.

The book is a cross between a romantic novel and a crime thriller. The developing relationship between Dani and Diesel takes as much precedence as the criminal activity and indeed can sometimes get in the way of the suspense. Whole sections run the risk of not being read, depending on whether the reader is more interested in the romance or in the criminal activity.

The sometimes sugary way in which all the friends in the group treat each other contrasts very starkly with the absolute horror of the crimes. Indeed, this horror cannot be minimised and starts from the very first page of the book. The book explores whether or not that kindness and love can overcome the darkness of the crimes.

Although this book follows the usual format of books by this author, it seems to be a cut above some of the others, possibly because it really seems to be “a story of my heart” as the author states. It is certainly worth reading, but be warned! Enough time should be set aside to allow for being unable to put it down, despite the horrors.