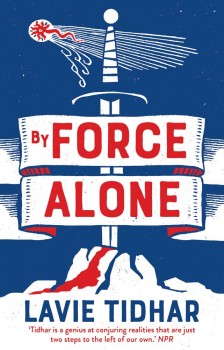 A new and very different take on the Arthurian legend that combines detective novels and thrillers with poetry, science fiction, historicals, children’s stories and autobiographical works.

Thousands of stories have been told about Arthur, the Once and Future king of Britain – but none ever like this! This is not the noble, chivalrous Arthur, full of Christian virtue, handsome in shining plate armour, so beloved of romantic writers like Chretien de Troyes or faux historians such as Geoffrey of Monmouth. Nor is it Wolffam von Eschenbach’s leader of the quest for an unspecified Grail or Robert de Boron’s religious interpretation of that quest. And it is certainly not the romantic rubbish produced by more Hollywood and theatrical writers and producers than you could flourish a lance at!

The book is set against a background of a Britain, its civil structure crumbling after hundreds of years of Roman governance and stability into a morass of petty kingdoms, gang rule and lawlessness, where control, as the title says, was by force alone. This is far nearer the reality of what little we know of the mid-sixth century.

This impressive and compelling re-structuring of the Arthurian legend is sword and sorcery – with the accent very much on the sword – at its absolute best. While sticking mainly to the structure of the 1485 Le Morte d’Arthur by Thomas Malory, this lunatic blend of history, myth and inspiration gives Lavie Tidhar the chance to parade all his genre interests in one violent, funny, and at times almost absurd, epic.

Who else could offer a near punk, street-boy Arthur, a Guinevere as the cold-blooded hitwoman leaderene of a girl gang and the romantic Frenchman Lancelot, son of the King of Benoic, as a Nubian-born, Jewish-educated kung fu master?

Tidhar remains an utterly original voice. This twisted, brutal, gory deconstruction of history and myth brings new raucous blood into the moribund tales of Camelot, dragging Arthur’s golden capital into the 21st century ambit of The Wire or Peaky Blinders of the Round Table!

In a land abandoned by Rome, where society is collapsing, filled with rain, mud and magic, giants and monsters, run by crooks and killers, a skinny London street kid, full of ambition and convinced of his own infallibility, rises to sole rule, no matter what the cost.

There is no chivalry, nobility, no shiny armour. His court of foul-mouthed, murderous, opportunistic wheeling and dealing ‘knights’ and their women, a gangsters’ paradise, resembles nothing so much as the Krays, the Richardsons and the more recent Chechen and Russians mobsters meeting Monty Python. But amid the killing, there is humour in all its breadth and intelligence – references to ancient Greek philosophers and mathematicians, speculation and visions of future events and inventions, a descendant of Joseph of Arimathea as an obsessed cult leader – and this wildly inventive story is a perfect take for our time on the Arthurian legend.

There is also mystery. Who or what is the eldritch Merlin? Where do the often vicious and equally ambitious residents of ‘fae’ come from or go to? Narration from various sources only adds to the story while never becoming confusing.

The multi-talented Tidhar works across genres, combining detective novels and thrillers with poetry, science fiction, historicals, children’s stories and autobiographical works. This, in all its disgusting detail and literary glory, may be his best to date. There certainly will not be a better fantasy story published this year!